We have had two five-mile walks so far here, setting out directly from our
campsite at Broadgate Farm in loops along bridleways, footpaths and quiet roads. Our first walk started downhill towards the River Brock which we thought would make for a pretty stroll. It was pretty but also incredibly muddy when the local pony trekking centre had preceded us, churning up the paths. At the stream we were able to wash our boots as there wasn't a bridge, just a ford. We deliberated for a few minutes, but both managed to stride across without getting soggy socks. Our return took us past a lovely mid-nineteenth century house called Bleasdale Tower, presumably named for its chimney.

Monday was a shopping day so we took ourselves to Garstang which
isn't far as the crow flies, but took a good twenty minutes in a roundabout way along narrow rural roads. We discovered The Children's Society charity shop which had a surprising good selection of books - we bought three - and four other charity shops that were pretty standard. Unfortunately the fishmonger was closed, but we managed to spend more than we intended in Singletons butchers. And we bypassed the Sainsburys, having become disillusioned with their fresh produce, in favour of Booth's supermarket. There was a Booth's in Penrith which we saw but didn't visit and now I wish we had. It's a really good supermarket! Not cheap, but with good quality produce much of which is from local producers and nicely laid out with lots of space and room to browse. Our highlight from Monday is probably the Dewlay cheesemakers (based in Garstang) Special Reserve Lancashire cheese. It is delicious! We also (finally) found buttermilk which I used in today's Irish soda bread loaf for lunch. The buttermilk itself tastes almost unpleasantly cheesy but we didn't think it added to the taste of the bread at all so I will probably stick to the more versatile combination of yoghurt and milk in future. 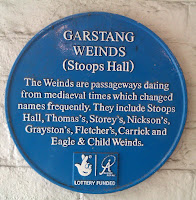 of walls. The weekly market was granted by Edward II in 1314 and renewed by Elizabeth I in 1597 with Charles II granting a town charter in 1680. The little alleyways here are known as Weinds and date back to medieval times. Famous visitors to the Royal Oak pub include Sir Walter Scott in 1828 and by Celia Fiennes in around 1650. Celia was an enthusiastic traveller much like us except she was traversing England in the 1600s on horseback eagerly searching out innovative industries and regional products. A book of her memoirs was published in the 1800s and reworked in 1947 so I shall have a look for a copy to read.

Our second walk saw us setting out at half past ten this morning which,
in my world, is seriously early! We ascended above our campsite enabling us to look back across the valley, and then made our way through woodlands and across fields to the little village of Calder Vale on the River Calder. The inhabitants seem very keen on gardening and practically every tiny terraced front garden was a blaze of brightly coloured flowers. One also had a large Lancastrian red rose sign protesting the recently proposed fracking in this county. I guess the threat hasn't completely gone away. Our path took us along a diverted millstream and a pretty lake with ducks on it - much happier looking than those ones near to Appleby. Other nature sightings that were more exciting were a hare, a wren, a deer which bounded away over a wire fence taller than itself, and walking through a flock of swooping house martins. We returned around Bleasdale Tower again, pausing only to buy a half dozen fresh farm eggs from an honesty box by the back door.

The sun is out now and we have blue skies at last. We are also the only caravan now on our campsite and it is beautifully peaceful here. I think I shall make the most of it by snoozing in the warmth with a book! I will leave you with another petition to please click through to read and sign. Not satisfied with attempting to dismantle the BBC, those wretched Tories have now got their cannons aimed at Channel 4 too.

SumOfUs emailed me to say:

"George Osborne’s massive privatisation programme is gathering steam and Channel 4 could be the next victim.
Channel 4 is a taxpayer-owned, not-for-profit channel that funds itself through advertising. The result? We get innovative, award-winning programmes like Channel 4 News, Educating Yorkshire and Gogglebox that cost us taxpayers nothing.
But, according to senior sources, George Osborne plans to sell the channel as part of his drive to asset-strip our country.
If he succeeds, the new owner will be looking to produce profits, not quality programmes and funding to independent programme makers will inevitably be cut. Right now, Osborne is considering Channel 4’s fate with Culture Secretary John Whittingdale, and we have a window of opportunity to make our voices heard."