Visiting Brecon and walking the Monmouthshire And Brecon Canal

I thought that Brecon was a lot closer to Cynghordy than it actually is.
The drive took three quarters of an hour, each way, but it did give me the chance to preview some of the road I will be driving with our Bailey Orion caravan on Tuesday. It's always a bonus to have an idea what to expect when towing! Once in Brecon, we parked up near the canal basin in an official car park that was only £1 for 6 hours. We had a quick look around there, planning to return later in the day, and watched a large day trip boat, The Dragonfly, being poled 180 degrees to start its noon voyage. We vaguely considered hiring a little boat or canoes to explore the canal for ourselves, but hadn't come prepared and I wasn't going to risk getting my gorgeous red Gabor boots wet!

Brecon town centre is smaller than I expected it to be. There were quite a 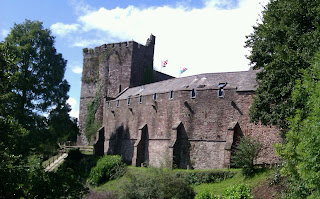 lot of people enjoying the sunny afternoon, but it didn't feel like the height of the summer season. We walked up to Brecon Castle and got a good view of the outside. It is now a luxury hotel. The town is made up of lots of little streets, many of which have Georgian and Jacobean shop fronts and an interesting array of shops. As well as a choice of outdoorsy shops, there are also several dedicated to classy homewares and decor, antique dealers, an extensive vintage bookshop and a smattering of High Street names. We walked through the little undercover market and admired the exterior of the Brecknock Museum. Unfortunately it appeared to have closed down so we couldn't see inside.

Lunchtime allowed us discover another pretty little cafe, the Bijou Deli on
Watton. The building functioned in turn as a coal merchant's, an antique shop and a shoe shop before its current incarnation as an elegant and friendly cafe. The wifi isn'f for customer consumption, but the coffee is very good and we both enjoyed our food. Dave had a large bowl of Mediterranean vegetable soup and I had a tasty Veggie Chilli with Nachos. The cafe window displays vintage-style wicker picnic hampers which I would love to own. Completely impractical for our style of walking and picnicking, but they do look fabulous and weren't outrageously priced. 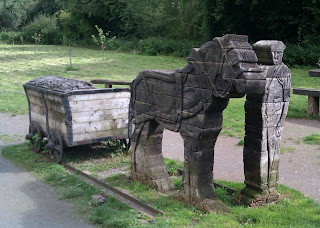 walk along some of the Monmouthshire And Brecon Canal which dates from the 1790s. The towpath is now a popular cycle route as well as being used by walkers and joggers so, at times, it felt even busier than the centre of Brecon. I had caught a glimpse of this pony sculpture from the car as the road goes alongside the canal for a little way. Made from wood, it commemorates the tramway which used to run from the canal at Brecon to Hay On Wye and was at one time the longest tramroad in the world. Other wooden art along the first couple of miles of canal include several benches with metal bars and rings that look as though they were created from pieces of dismantled locks. We also liked this map bench which shows the entire length of the canal.