Ten miles walking across Dunsop Fell and the Forest of Bowland

We have just about exhausted our new-walk options directly from
Broadgate Farm so had to venture forth in the car to start our latest expedition yesterday. This time we followed a route suggested on Walking Britain: Walk 2508 - Dunsop Fell and the Forest Of Bowland which is ten miles long and incorporates 430 metres of ascent. We took our usual picnic lunch of sandwiches and an apple, and were pleased to have a dry day that was almost summery warm, but without the super-heat of today so the uphill slogs weren't too uncomfortable. I learned from a Bowland Fresh milk carton label that Bowland is an anglicisation of 'bous land' meaning 'land of cattle' and cows have been grazing the lush green grass in this region for over 1400 years. It's very good milk!

Our walk began in the tiny village of Dunsop Bridge. One of two main 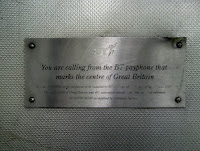 contenders for the location of the exact geographic centre of Great Britain, apparently Dunsop Bridge is the 'gravitational centre'. Its competitor, Haltwhistle, which we visited when discovering Hadrian's Wall is 70 miles away! There is a remarkably large car park, testament to the village's popularity with walkers, and eight hours parking was a reasonable £1.90. There is a special phone box near the car park too. Installed in 1992, it was BT's 100,000th payphone and includes the pictured plaque to explain its significance. The telephone box was unveiled by none other than Sir Ranulph Fiennes - I'm not sure why he got the job though.

We walked through the village, noting the location of the tea shop, and
took a private road past Forestry Commission cottages that led eventually to a stream with a pretty bridge. This part of the walk, as well as being a footpath, was also marked as a Tramper Trail which is something we are seeing a lot of in this part of Lancashire. I don't know if they are so popular elsewhere in the county or country, but it's a great idea. Essentially an all-terrain mobility scooter, Trampers allow less able people to venture out into rural locations that they might not otherwise get to visit. We met a couple at our Great Busby campsite who had one stashed in their motorhome because the woman was almost blind. They said the only thing that could stop a Tramper was a stile. Steep steps took us away from the Tramper Trail and started an ascent that was going to last, at varying gradients, for the next three hours! We crossed fields and I was nearly stymied by a dry stone wall whose built-in steps had somewhat worn away. Faint paths led us to Back Of Hill Barn - a structure positioned exactly as its name suggests - and we then had the respite of a short downhill section on the way to Roofless Barn on the next hill.

Back on road for a few minutes, we avoided getting squashed by a 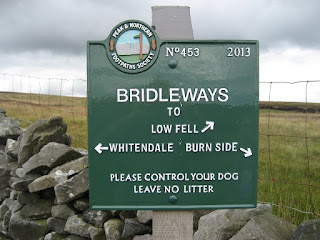 tractor before taking another private road to Burnside Cottage. The footpath follows a posh drive with solar streetlamps, then squeezes past the side of the house. We failed to spot any evidence of a former Roman Road, but did find the entrance to United Utilities land which covered much of the rest of our walk and is Open Access, albeit with proper marked footpaths too. Once up onto Dunsop Fell proper, we headed across to Beatrix Fell and did have trouble keeping track of the path as it often submerged into deep peaty bogs. Dave had brought his compass so we had a good idea of the correct direction, but spotting this signpost was a welcome relief. The views were stunning and we could see for miles.

Leaving the Fells, we descended towards Whitendale and began our
home leg walking alongside the River Dunsop. This is still United Utilities land and they have put up signs proudly announcing the work they have done here both for flood management and in creating viable environmental systems to enhance habitats for wildlife. This first photograph shows a massive flood barrier which was made up of hundreds of tumbled rocks and we also saw the huge pipes that carry water from Thirlmere in the Lake District all the way to Manchester. The Dunsop is an important salmon river so new salmon ladders were recently built too.

Strolling along the riverside was a lovely way to finish this interesting and varied walk. It wasn't one of the most spectacular, but does take in different environments and is strenuous enough that we felt a sense of accomplishment at the end. Including photography stops and a couple of map discussions(!), the walk took us six hours so we hope it was actually a bit longer than ten miles otherwise our average pace is getting slower and slower. Unfortunately the teashop had closed by the time we got back to Dunsop Bridge car park so I couldn't buy Dave the bun I had earlier offered. We did have a bag of chocolate limes in the car though.