A day in Lancaster and a ten mile Fell walk

Yesterday, being a grey sort of day, we decided to take a drive and visit
the city of Lancaster which is not too far from our Bleasdale campsite. I was expecting something similar to York, but Lancaster is very different and we weren't exactly enamoured with it. There is a historical part, but we couldn't find much in the way of cute little shops and cafes. It is a university city without much sign of student-budget lifestyles! The city centre has lots of big name high street shops and also a high proportion of empty shop fronts so I guess the aftermath of the recession is still widely felt around here. Two shopping malls were doing brisk business though and I saw the below image in one. This actually my photograph of their photograph of the 800th anniversary commemorative tile picture because, when the old shopping centre in which it was displayed was destroyed, the workmen couldn't successfully remove the tiles from the wall.

We did find ourselves a reasonable place for lunch. The Waterwitch pub on the canalside does a good Five Bean Burger, albeit with rather odd chips, and we got to watch a narrowboat struggling to turn itself around so that was entertaining. We also stumbled across a fantastic wholefood cooperative, Single Step, where we found two new brands of smoked tofu to try and I picked up some delicious Dragonfly Chai tea bags and a couple of organic Suma spice

packs. There were hundreds of interesting looking jars and packets in this shop which has been in business since 1976 - if you're ever in Lancaster, do take a look. And we found cheap copies of Shameless

series' three and four. Neither of us saw the programme on TV but we are catching up now.

Today we awoke to gorgeous hot sunshine and finally started to believe
that it might be summer All Day. How amazing would that be?! Dave had found an article by an Andrew Bibby in Country Walking magazine where he described a ten mile walk that passed Oakenclough Fell, Hazelhurst Fell, Holme House Fell and Fairsnape Fell. It looked like a good loop and we could do the walk straight from our caravan with no driving required. The first leg was probably the most strenuous uphill of the day and we both got a tad overheated in the sun - mustn't grumble! The views at the top of the footpath where it met the Oakenclough road were impressive and just got better and better the higher we ascended.

We left the road by Stang Yule, kept going upwards and traversed a not- 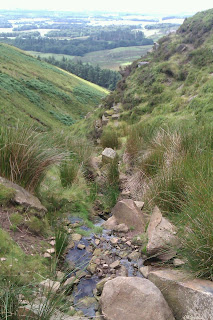 very-boggy bit of moor alongside a large area of felled woodland heading towards Oakenclough Fell. The views from up here were spectacular! We looked out over Morecambe Bay and across to Blackpool - we think we could even make out the Blackpool Tower. Behind Morecambe Bay, the hills of the Lake District rose up mistily. Unfortunately, my aging phone wasn't up to capturing the distant details as you can see from this picture here. I must start carrying Dave's good camera on our walks. It's bulky in comparison to a phone, but I am sure would be worth the effort of learning how to use it properly. Heading towards Hazelhurst Fell we joined a wide track which is used by the grouse shooting parties so it is kept in pretty good condition. The track continued under the trig point and on to Clough Heads Brook which was easily crossed in one step today, but we understand can be quite the torrent at some times of the year.

Our Ordnance Survey map then showed the track continuing in a wide
loop for miles. On the ground, however, it doesn't! We carried on blithely following said track, wondering when it would turn more to the right. We did pass this recently erected memorial to British, Polish and American airmen who died in nearby accidents during the Second World War and the Berlin Airlift. The memorial looked remarkably new so we googled it this evening found this Wigan Today article about its unveiling earlier this year. Our track then unexpectedly began descending, still refusing to turn to the right, and we began to suspect that we would not be completing our planned route. When the track abruptly stopped, so did we and ate our lunch perched on a convenient stack of logs while we debated what to do.

We briefly tried setting out across moor along a line of hunting hides, but
didn't really know where we were headed so returned to our track and began to retrace our steps. Another aborted diversion across very boggy bog was actually, we later learned, the Right Way, but the signposted waymarkers weren't in evidence so after a quarter hour of optimistic floundering, we returned to the known track again and came home back along the same route as we went out. We still managed a good ten miles in almost exactly five hours and got to see the fabulous out-to-sea views again so all was not lost.