Our visit to the locally famous Bleasdale Circle was probably the last
walk we will be able to do directly from our campsite. We have covered all the immediate routes so will now need to drive a way in order to take a new walk. We set out on the same uphill path from our pitch as when we started our abortive Fells walk, only this time we stayed on the road for longer which was a hairy experience. Drivers do bomb along these narrow rural roads as though there will never be anything in their path, even though there is quite a lot of traffic. Fortunately we had a narrow grass verge upon which to leap to safety, but we were both glad to turn off through a farmyard as soon as we could. Crossing fields and following lanes where blackberries are just beginning to show themselves took us into Bleasdale village which is a small cluster of nice houses. We were surprised that they still retain their own school and I loved this carved 'Friendship Bench' in the playground. I learned online later that, as of March this year, the school only has thirteen pupils!

A large circular plaque outside the Village Hall gave us directions with a
rough map and a description of the history of the Bleasdale Circle. Believed to be unique as it contains distinctive features not found in any other Circles, the Bleasdale Circle was made of timber posts which have long since vanished. The small inner ring and grave are apparently Bronze Age and were probably erected at some point between 1700-500 BC. A larger offset encompassing ring may have been as much as 2000 years older and had probably vanished from view before the inner ring was started. This has been a religious site for millennia! There isn't much to see now - basically just a circular ditch and some replica posts and I didn't get a sense of the history of the place like I did at Vindolanda or when walking Hadrian's Wall. 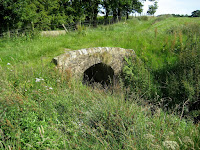 stone bridge supporting our grassed over track. It seemed incredible that so much work had been put in to traverse a minor brook, but I guess it gets much bigger at certain times of the year. We were able to look back at the small woodland which surrounds and protects the Circle, but it doesn't look anything special from a distance - just a small copse at the base of the high Fells. We did see a dozen or so hang-gliders leaping off the hill and soaring in the skies above us. There was a distinct lack of interesting wildlife though. The best we managed was possibly-a-goldfinch and rabbit!