Ingleton Waterfalls Trail and the best cake shop in the country

We received a lovely email from our friend Barbara earlier today. She was
primarily in contact discussing October's Danny Schmidt UK tour about which we are all very excited. (If you don't yet know his music, pop by his website and take a listen. He's an amazing songwriter!) Barbara also said "Steph and you should win a British Tourism Association/Ramblers award for all the good stuff she writes, and walks you plan!" Praise indeed and would anyone like to take her up on that award?

Yesterday was a pretty perfect summer's day and we took advantage of it in order to sneak back across county borders to Ingleton in Yorkshire. The pretty village has wonderful shops - more about them later - and is also the site of the Ingleton Waterfalls Trail - exactly what it says on the tin. The 8 kilometre Trail has been in existence since April 1885 and is visited by thousands of people every year. We didn't expect to have the same solitude as on our Fell walk and the Trail was busy, but not overwhelmingly so. Entrance is £6 per adult (£3 for kids) which includes parking and turned out to be excellent value. I would recommend stout footwear as most of the route is rock and earth which can get slippery. We saw a few visitors struggling in sandals.


We began by walking up the River Twiss away from Ingleton village. The 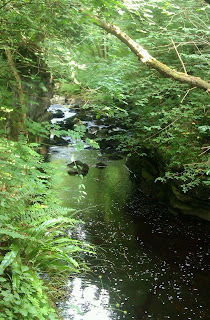 trail is through a wooded gorge with sheer rock sides, lots of moss and lichen, and dappled shade. We were serenaded all the way by the babbling of the river. It isn't particularly deep at this time of year, but we could tell from the size of some of the deposited rocks how powerful it could become. The Trail is open all year (except Christmas Day) and I imagine walking it would be a completely different experience in winter snow or spring floods. There is quite a distance of river walk before the first of the four waterfalls on the Twiss. I read that the Pecca Falls, as the first three are known, have a combined drop of 30 metres. We weren't as blown away by them as we were by the combined Low Force and High Force waterfalls, but the setting here is especially beautiful and reminded me in places of the stunning Huelgoat in France.

There are a couple of oddities along the way, one of which is this money
tree. If you look closely - you might need to click into the photo in order to see a larger version of the image - the bark has been stuffed with thousands of coins. Apparently done for luck, most of them are quite modern 2p pieces, but a notice claimed there are antique coins among the multitudes too. The tree itself is definitely no longer alive and was lying horizontally, presumably having fallen from the weight of too much money. There's probably a moral in there somewhere! Elsewhere on the route, another fallen tree trunk was covered with flat slate stones making it appear like a long cairn. 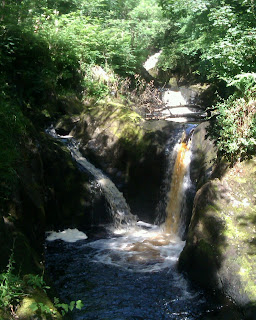 finest waterfalls in the Yorkshire Dales, but unfortunately my phone camera couldn't cope with its majesty, bright sunlight and deep shade all in the same photo so the image to the right is one of its lesser neighbours. Still pretty! Thornton Force's big namedropping claim to fame is that JMW Turner visited in 1816 and drew a sketch of its 14 metre plunge. Said sketch was reproduced on a signboard for posterity!

My abiding memory of the Trail will surely be steps. There are lots and lots which isn't that surprising considering that we would need to have climbed above the height of one waterfall in order to see its preceding one. Once past Thornton Force however, there is a very steep flight and then the Trail crosses out onto public access farmland for a while. There are great views out over limestone cliffs and scars. We even saw Ingleborough in the distance across Raven Scar and weren't tempted to divert and climb it. Well, we were a little bit, but it looked a long way. 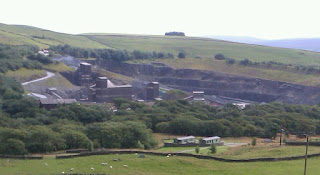 accompanied by a loud wailing siren followed by an anti-climactic 'crump'. The reason for both sounds was the proximity of a large quarry - a real blot on the landscape. On the flyer for the Trail, holiday home cabins are advertised at a reasonable price for a small park in the middle of such fantastic walking country. Now the online description for these had been slightly tempting so we thought we might take a look if the Trail passed close enough by. It does and when we got this pictured view, we realised why the price seemed so low. Can you just make out the first two holiday homes in front of the trees? Surprisingly the blurb for Falls Park makes no mention of the quarry!

Our return walk brought us down the River Doe, again along picturesque
river banks and passing yet another three waterfalls as well as some intriguing rusted industrial remains which looked to be mining or quarrying related, but weren't explained. We expected to emerge back in the car park, but were actually diverted into the village itself which is very pretty and has a good selection of enticing shops. We wandered into the fabulously named Frumenty And Fluffin and immediately wanted to buy a house in Ingleton! This must be the best cake shop in the country! There's a mouthwatering array from which to choose and the slices are huge. And I mean HUGE! I had a gorgeous coffee cake with perfectly just-bitter icing and I almost couldn't finish it all. The same was true for Dave with his slice of Bakewell Tart. Amazingly, both cake slices together only cost us £3.90, but disappointingly the shop is up for sale so you'll need to get there quickly to try the baking for yourself!

If you can't just up sticks to Ingleton in the next few weeks, I have other news of good edible treats: I got an email from Whittard Of Chelsea a couple of days ago announcing their Summer Sale. They are offering a generous 30% discount off selected teas, coffees, hot chocolates, gifts and tableware. I love their tableware - and their hot chocolate! (Plus, if you visit the Whittard Of Chelsea website through one of these links, I would get a small percentage of any purchase price as commission. That would be nice!)