The centre of Britain and walking Hadrian's Wall

We hadn't given much consideration to our tour's southward return leg
until recently so the fact that we would be passing one of the best preserved sections of the iconic Hadrian's Wall, well, it almost passed us by! Fortunately though, a slight detour and a four night campsite booking has given us the fantastic opportunity to explore this incredible landmark. Having been so taken with the preserved site of Emperor Hadrian's birth city while we were in Spain - the fascinating Italica which is well worth a visit - we just knew we had to also take in the British highlight of his reign.

Our campsite, Whitlees, is just outside Gilsland and is a Caravan Club CL.
It is a basic field with water/waste, electric hook-up and recycling bins. The surroundings are a lush green, but the wind whips across here with practically nothing in its way and it was very loudly windy throughout our first night - hopefully I will have managed some sleep during our second night! The single track lane access is only short - a relief after the blind bends to our last CL - and there are chickens and ponies in the field next door. We are only about three miles from Haltwhistle which we have learned proudly claims to be the geographic centre of the British Isles. It is also the starting point of the wittily named AD122 bus route which takes visitors between the various tourist spots along the Wall in summer.

We couldn't wait to Get Out There on our first afternoon so calorie loaded
with a Scotch dumpling, bacon and sausage lunch (Scotch dumpling is a kind of spiced fruit bread/cake slice. Odd to have sweet tastes with a fry-up, but good) and went on a five mile walkabout from our campsite to Birdoswald and back. The walk turned out to be as interesting for its trio of bridges as its wall. This first carries the railway and is an imposing Victorian-looking edifice. The official Hadrian's Wall Path goes across the line just outside Gilsland and I was interested to see large signs demanding the re-opening of the railway station in order to bring a share of the Wall tourists into the town's commercial centre. I think it's a great idea and it does have some influential support. If you would like to learn more, the Campaign to Open Gilsland Station has its own website.

Further on, we saw the edge of where the ancient Roman bridge used to
cross the River Irthing. The river itself has moved several metres in the last 1600 or so years since the Romans left so the bridge would have been obsolete by now anyway, but I found it hard to believe that another had not been built in its place (or thereabouts) in the centuries since. Presumably the round trip wasn't a major inconvenience for too many people? In keeping with the Wall itself, what remains of the bridge abutment is constructed with solid stone blocks in strong geometric lines.

I think that walking tourism is probably what drove the demand for a new
bridge and the lack thereof was finally rectified in 1999 with an award-winning metal creation, Willowford Bridge, which is beautiful to see. I love the curve and sweep of this bridge, its natural colouring, and it placing within the landscape. It does look modern, but also fits in as though it had always been there. Although walking over it was a little unsettling as I could see the brown torrent of riverwater through the gaps in the steps! Apparently, the local environment is so sensitive, and the Hadrian's Wall Path National Trail organisation (who funded the bridge) were so determined not to damage it, that they lowered the bridge in by helicopter!

We didn't go into the English Heritage site at Birdoswald mainly because, 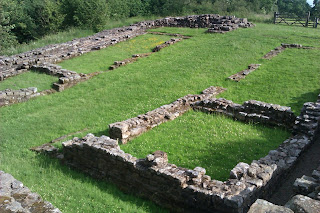 by the time we arrived, it was already getting close to closing and we still had to walk all the way home again! Perhaps another day? Instead, we did see a good three hours worth of Wall close up and stretching away into the distance. We also identified the bases of a couple of turrets which I think were like sentry posts, and also got to spend quite a bit of time at the Poltross Burn Milecastle. These Milecastles were built every Roman mile along the wall (about 1.5km) and this particular one makes it very easy to see where all the original walls were.

We also saw an inscribed Roman wall brick which, fortunately, had a translation on a plaque underneath. To be honest, I saw the plaque first! It has been reused in building a barn and was positioned in pride of place. The barn was just above the old Willowford Bridge.