It's been a #ShopLocal day in Penrith

We caught a glimpse of historic Penrith last week when we popped in to
see the RSC broadcast of The Merchant Of Venice at the cute little Alhambra cinema. (A great venue with very comfortable seating and sensible ice-cream prices.) If you didn't see this production, do keep an eye open for encore screenings as it is excellent theatre. The mirrored golden set is a wonderful idea and the performances are, as you would expect, superb. I particularly liked the portrayals of Antonio and Portia. The play was scarily contemporary in its plot and message with the intolerant attitudes driving the story being, depressingly, pretty much the same four hundred years ago as they are today.

Penrith is a misleading town! It appeared run-down as we drove in, but
supports an impressive array of upmarket independent shops and cafes. The Millennium Trail was laid in the year 2000 and consists of 83 pavement markers radiating from the town centre. There are a number of walks taking in these markers and map leaflets are available from the Tourist Information Office. Penrith also has eight blue plaques, although we only spotted this one pictured, commemorating the life of a Charge Of The Light Brigade participant. We saw buildings dating back to the 1700s and 1600s and there are many gated alleys and twittens (or whatever the Cumbrian word for twitten is) all of which are signed. Photography is tricky as streets are either not wide enough to get enough distance or streaming with traffic, but this is certainly an interesting town to visit. We strolled around for an hour so before we began shopping in earnest.

Our first port of call was Cranstons butchers where we picked out two beef truffles for our dinner tonight. If
we eat before I finish this post, I will let you know what they are like! Rich, dense beef patties topped with onion, bacon, grated cheese and a pat of garlic butter; bake in the oven for half an hour. Fantastic! Cranstons has been in town since 1914 and, with produce like this, I'm not surprised!

Lunch for me was a delicious Eggs Benedict at The Lemon Tree cafe where Dave had a Pastrami and Emmenthal grilled sandwich. Friendly service, but they shot themselves in the foot with their portion sizes - we didn't have room left for dessert even though the pudding menu was very tempting! The Lemon Tree is in the Devonshire Arcade, an elegant structure originally opened in the 1860s as the entrance way to the market. Among the independent shops here is a good greengrocer where we stocked up, and a fishmonger's shop that looked enticing. We considered their locally smoked mackerel but already had a fridge-full.

Outside the arcade, nearby by in the centre square is a very dangerous 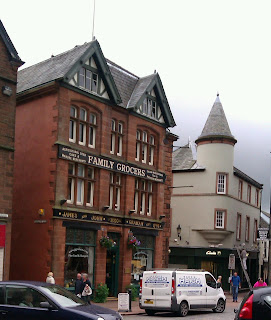 shop! JJ Graham's was established in 1793 has been in its current location since 1880. They had lots and lots of items to tempt us! We did manage to escape without buying cake, but only because we were weighed down with Scottish jam and local butter, a pie each for lunch tomorrow, and lots of cheese. We tried samples of a Norwegian caramelised Gjetost and a Porter cheese from nearby Cahils Farm - and bought both! I will bake another soda bread loaf to do them justice.

Luckily we got away without getting rained upon although it is coming down heavily now and we seem to have a couple of leaks in our new awning. Not too impressed with that. The zips on the front doors are soaking wet even though they appear sheltered by canvas which is dry. There is a caravan supplies shop in Penrith where we got some black streak cleaner this morning. Perhaps we should have looked for waterproofing spray as well?