Crossing the border - Foulden Hagg and Berwick Upon Tweed

We had hoped to stay at the Paxton House CL, but they failed to respond
to our enquiry so Dave went back to the drawing board and we are now just over the border into Scotland, staying at the wonderfully named Foulden Hagg campsite instead. I have no idea what that means! It is a Caravan Club CL and I think it is only going to be £10 a night including electricity. Bargain! The site is a long green grass field with views out over the countryside towards the Cheviot Hills and is just on the outskirts of a pretty village. We managed to baffle our new neighbours by pitching up in our Bailey Orion. We have hardly seen any other Orions but apparently the couple who had left this pitch in the morning had exactly the same model! We are under the edge of trees which dripped at volume with the rain in the night, but will provide lovely shade if when the sun comes out.

This afternoon we drove into Berwick Upon Tweed and this another place
for my list of anniversary years - Berwick is celebrating 900 years since King David of Scotland appointed the town as one of his two Royal Burghs. Because we plan to return during next week, we didn't do any touristy things like walking the formidable town walls, but did have a good wander around the town. There is a good range of shops - high street names and a lot of interesting independents - however, away from the main commercial streets, the town feels quite depressed with a high proportion of empty shop fronts and boarded up windows. I loved this doorway which fronted a derelict building and I hope that the company doing up its street keeps the quirky facade. We walked down to the river to see the three imposing bridges including the Robert Stephenson one we crossed on the train a few years ago when we had our Scottish rail tour holiday. 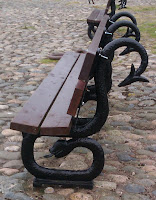 glimpsed a large flock of white birds in the distance learning later that they comprise the second largest mute swan colony in the country. There are some interesting features that I liked. All the waterfront benches have these elegant sea serpent backs and we also spotted our first of the 'Lowry plaques'. These information signs, The Lowry Trail, are placed at the sites of famous Lowry paintings around town and give details as well as a reproduction of the relevant work. The red brick building in the image below is a lot less red now than it was when Lowry visited - or perhaps he embellished its brightness?!

We paused for refreshments at The Corner House which turned out to be a great choice of cafe. The decor includes huge worn leather sofas, and they also display vintage movie posters and second-hand books for sale. I was proud that I managed to resist book buying! I can certainly recommend the delicious Victoria Sponge and we also got to try the locally roasted Northern Edge coffee - also excellent. I had seen bags of their ground coffee in the Tourist Information Office when we got a map.

Two other firsts today: our first purchase of tofu - we are trying the Dragonfly brand which is organically made in Devon and will replace the chicken element in a Tamarind Chicken dinner - and our first visit to a Morrison's supermarket - liked the extensive range of fresh produce, especially compared to recent disappointing Sainsbury's stores, otherwise just supermarkety!

Looking ahead, we have fingers crossed for a walk somewhere tomorrow. Dave is poring over maps as I type, but we don't yet know which country will host our ramblings! The most exciting news saved for last though: we popped into Berwick's arts centre, The Maltings, and have bought our tickets for the National Theatre Live broadcast of Everyman next Thursday. As yet we don't think that many tickets for the play have sold here so we might have a private-ish screening. I hope not though. I'd prefer the atmosphere of a full house.