Saving the best for last - Vindolanda Roman Fort and Museum

We chose to only visit two of the big attractions along Hadrian's Wall in
order to have plenty of time to appreciate each rather than rushing to fit too much in and getting ourselves overwhelmed. We enjoyed our visit to the Housesteads Roman garrison on Saturday and were expecting a similar experience at Vindolanda on Monday, with the possible addition of watching a couple of actual archaeologists too. As it turned out, we only spotted a single archaeology-type person and she was pushing a wheelbarrow, not uncovering treasure in front of our astonished eyes, but the site at Vindolanda surpassed all our expectations and was definitely the highlight of our Hadrian's Wall weekend. Slightly cheaper than Housesteads and with a free car park, Vindolanda covers a large outdoor site as well as having an extensive museum to house a selection of its incredible finds.

In common with the Anglo Saxon village we visited at West Stow in
Suffolk, archaeologists at Vindolanda in the 1970s indulged in a spot of experimental archaeology by building replicas of wooden and stone variants of Wall towers. These not only gave us the opportunity to understand how such towers would have appeared above foundation level, and to climb right up for a great overview of the whole site, but also allowed their builders to see how turf banks subside over time and how long materials could be expected to last in local weather conditions. A total of nine forts have been identified on the site. The first half dozen were wooden constructs, each built directly on top of its predecessor and only lasting less than a decade. 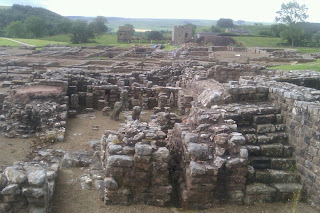 excavated and appearing to our untrained eyes as complete chaos, and the areas previously excavated, rebuilt and neatly covered over with protective black sheeting and gravel. The walls are much more vertical for a start! Identified buildings included granaries and food stores, workshops for leather and metal, large houses for the elite and tiny circular huts that might have been Britain's first prisoner of war camp, bath houses, wells and water courses, gateways and shops. The whole potential area stretches for hundreds of metres past what is already on show. We were told that excavations began in earnest forty years ago and there is easily another two hundred years of work still to do! Volunteers are encouraged to sign up to help!

Once into the indoor museum, I was astounded at the quality and variety
of artefacts on show. The first case had a display of leather shoes eerily reminiscent of similar display cases at Auschwitz. Natural fibres hardly ever survive so long, but conditions in the Vindolanda soil are perfect for preserving leather, cloth and even tiny wooden tablets inscribed with notes and letters. I had not previously been aware of the extensive writings found here. Over 300 messages so far unearthed are described as the most important British collection. They even include the earliest writing known to be by a woman - a birthday party invitation annotated by Lepidina. I also gawped at dozens of coins, beautiful glassware, intricate jewellery, ... ! This truly is an incredible collection and it is still being added to, season by season.

Near to the museum are three reconstructions: a typical house, a shop
and a small decorated temple. We were surprised how similar the structures and their organisation are to modern equivalents. Similarly, many of the unearthed tools and utensils are practically identical to their twenty-first century counterparts. Take plastic and electricity away and we really haven't changed much at all!

The museum gardens are elegantly landscaped and used to be the private home of the man who began seriously excavating Vindolanda. We were led to find swallows nesting under the eaves by their yelling - can you just see a chick peeping out? There were yellow wagtails too. Our only other good sighting has been a particularly bold mistle thrush on our campsite.

Prior to Vindolanda we had strolled briefly around Haltwhistle, famous as
the geographic centre of Britain. It is a lively town, touristy but not too much so, and with a good mix of independent shops. One window display that caught our eye was this one for hand-crafted spatulas! Following a map to the nearby industrial estate we met Tim Foxall who was happy to chat about his business working local woods into these eyecatching utensils in a tiny open-sided unit. At the moment, he and his team of three are busy cutting spatulas for Edinburgh Festival. They plan to take 900 to sell!

We are on the move again tomorrow morning. Not far this time, just about fifty miles, and next time I blog it will be from Appleby-in-Westmoreland.