We are enjoying the unexpected heatwave by having a lazy day on our
campsite in Powburn today. I have washed a couple of sinks-worth of laundry, baked another loaf of delicious soda bread (thanks to Julie's Family Kitchen blog for the recipe) and made carrot soup for lunch, but then spent the afternoon engrossed in a good book (Singled Out

by Julie Lawford - review to be posted soon!) I am also now downloading my eagerly awaited Festival Of The Spoken Nerd kickstarter reward: Full Frontal Nerdity. (It's even got Klingon subtitles!) Admittedly the downloading doesn't really take too much effort on my part - Dave's laptop is really feeling the strain. Hopefully we won't lose our wifi connection at any point in the 3hrs 58min remaining. The download and DVD are now on sale to the public too and, should you not already have Kickstartered yours, you can get £2 off the DVD price by entering the discount code KICKSTARTER at the checkout. This code will only work during July though so get shopping soon!

Yesterday we strode out on another of our ten mile walks. We think this 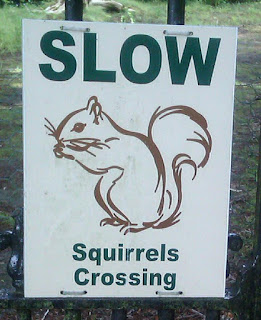 is about the right distance for us at the moment (although tomorrow we are planning on thirteen). Long enough to really get into 'the zone' but not so long that everything aches by the time we get home. The weather was lovely and hot with just a little cloud here and there. Driving to our start point, we learned that signposts stating that the road ahead is 'Unsuitable For Motorised Vehicles' are sometimes telling the truth! A couple of others we've walked along previously would actually have been fine for cars, but the one we took yesterday was hair-raising to say the least. Crossing its ford didn't present too much of a problem, but the mile of rough track afterwards was even worse than the access to Alcossebre campsite. We did hear an ominous clunk at one point too, but think our car escaped unscathed.

We used a fair-sized car park near to Middleton Hall where I spotted the
above sign about squirrels. There are supposed to be red squirrels hereabouts, but we've not seen a real one yet. We walked along the road for a few minutes, then started to melt as it took a steep uphill turn. Yesterday was not has hot as today, but when we didn't have a breeze it certainly was very muggy. Sheltered by a tree tunnel and with moss covered stone walls, the road reminded me of the Peak District near Hope. Dave saw 'Skirl Naked' marked on the map and, as we passed a small cluster of houses, we saw this stone engraved with those words too. Skirl we believe is something to do with Northumbrian pipes, but we haven't been able to discover the reason for this name exactly!

Descending the same height as we had just climbed got us to the bank of
the pretty Harthope Burn along which our road meandered for a couple of miles. Dave had been concerned that this might be a dull part of the walk, being on a road, but it was lovely. The burn babbled quietly and there were sheep and lambs nibbling on the lush green grass. Looking upwards we could see Coronation Wood and heather clad hillsides, then passing Langlee farm there were rugged crags high on the hills above. Settlements were marked up there on our Ordnance Survey map but we couldn't see their remnants from the valley floor. I found another perfect use for my tiny microfibre towel which I always carry in my rucksack. We have used it a few times to dry our feet after paddling on Spanish beaches, but this time Dave soaked it in cool burn water and used it to cool his head every so often. He has to wear a cap to prevent sunburn and we joked that a Kepi would be more use as the back of his neck is nearly hazelnut colour!

Footpaths and bridleways are clearly marked with new posts around
here and it seemed a popular area for walking and picnicking. We saw several people in the first half hour and then no one else until we returned back along the burn at the end of the day. Hawsen Burn led us uphill, eventually emerging onto bracken and heather moorland. We tramped a mixture of narrow peat footpaths, wider gravelly tracks and grassy verges. Our lunch was on a breezy hillside overlooking another burn and was perfectly idyllic. I love how huge the views are here and how little human construction features within them. The apex of our walk, Broadstruther, is a well-maintained yet apparently closed up isolated farmhouse and several times we could gaze around us and only see at most one building in the distance.

Returning back towards Harthope Burn, we descended a steep hill that 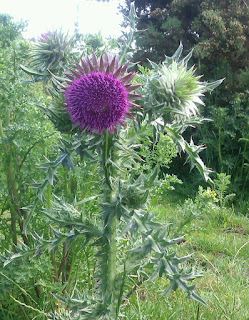 we had looked up on our way out. We could have done the walk in either direction, but Dave chose to put the more gradual incline first with a steeper descent towards the end. Considering how hot it was, I am certainly glad he did! We turned off the road we had already walked in order to finish by coming back parallel to it through Happy Valley, an area of green meadow with woods rising up the hill to our left and the burn to our right. I saw this gorgeously coloured thistle. We also spotted a single black and white bird watching us from a fence post and later identified it as an oystercatcher. It had a distinctive long bright orange beak and we saw another pair on the riverbank a few minutes later.

We calculated our route at just over ten miles and completed the
distance in a few minutes over five hours. We have heard from our friend Andy who I recently mentioned was involved in doing a much longer walk - the Refugee Tales from Dover to Crawley which he successfully completed. Every evening the group had a different speaker and he was excited that one was author Ali Smith. She soke of her experience visiting detainees and the tale was published in The Guardian so I have been able to read it. I found the piece upsetting and was shocked at how these traumatised and vulnerable people are treated. If this is the best we can do in this country then we don't deserve the moniker 'Great'.

Back to my download which now has just 4hr 6min remaining. Hmmm. This wifi appears to be going backwards!
Posted by Stephanie Jane at 23:28