Some final images of Berwick Upon Tweed

By the time this post publishes itself, we should be finishing up our
breakfast porridge and trying to stow all the random items we carry that still don't really have their proper place. Then we will hitch up and set out again to our next campsite. Tomorrow (or Today as you read this) we are heading back into England and to the west!

We will probably be a tad sleepy as we will have had a late night. We will have gone to the National Theatre Live broadcast of Everyman at The Maltings in Berwick. The play has had fantastic reviews so I am excited to be able to see it, but I think it is a long one! Again!

On Wednesday we finally got to walking the walls of Berwick. The ramparts, ditches and stonework have been in existence in various forms and combinations for hundreds of years and much of the current layout was built in Elizabethan times. Apparently the money needed to create Berwick's fortifications was the biggest expense of Elizabeth's reign - and they didn't even undertake the tunnels that had been planned to link the various bastions!

Under the Royal Tweed Bridge, we were lucky to catch a glimpse of an
information placard set against the entrance to one of Berwick's largest ice houses. It just looked like a gloomy tunnel to us! Built around 1790, it is 11 metres long and about 7.5 metres high and wide. That's three double decker buses worth of ice and it was a pretty pricey commodity at the time.

Around the walls, all the information is helpfully provided, without charge, by English Heritage. It's basically a lovely green open air museum up there! We stood on Meg's Mount from where we had wonderful views out across the town and the river. We also saw the concrete footing remains of dozens of gun placements and this solitary Russian gun which was 'liberated' from Sevastapol during the Crimean War.


The elegant white statue standing near to Meg’s Mount is a memorial to
Annie, Lady Jerningham of Longridge Hall who was a much loved philanthropist. She died in 1902 aged only 52 and this statue of her was donated to the town by her MP husband, Sir Hubert Jerningham. It's a shame that the sculpture is in such poor repair, but perhaps it will be sensitively restored at some point in the future.

As well as the Lowry Trail mentioned in a previous post, Berwick On Tweed boasts other artists including the wonderfully named Thomas Sword Good. His house in the town is marked with a plaque. I googled his work ans learned that he was trained as a house painter, but later turned his hand to portraiture. From the examples I've seen online, he belongs to the Very-Dark-Backgrounds school. 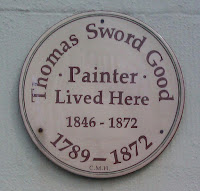 More militarism, which is only to be expected in a town that has been 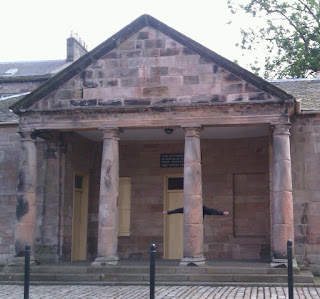 invaded and conquered so many times in its past. The Main Guard House used to stand in the centre of Marygate, but was moved to its current location in 1815 when Marygate was becoming inundated with traffic. We learned both that the building was moved brick by brick and also that a whole new building was designed and erected. Of the opposing histories, I prefer the former, but believe Visit Berwick's latter is probably the truth. The Main Guard is open to visitors, but not on Wednesday afternoon. Instead Dave provided interest by posing behind a pillar!

Wednesday is market day in Berwick. They have a carousel and a mechanical rodeo, neither of which we rode. Instead we shopped at The Green Shop - a multi-roomed emporium of all that is organic, free-range, artisan-made and delicious. I could have easily have blown a month's budget, but settled for locally-roasted Northern Edge Jimmy strength coffee and Tyne and Wear Storm Tea (English breakfast blend). If you're ever in town, do make a point of visiting this shop - there's clothing, soaps, candles and fresh foods too. More Dragonfly tofu from Holland and Barrett completed our shopping and not only will we have marinaded the plain for last night's dinner, but we bought smoked to try as well. I'm getting a bit concerned about Dave's changing tastes!!