A quartet of Roman monuments in Arles

We nearly decided against visiting Arles as the train fare was going to be
some €20 each and Dave's car park research took ages to come up trumps. In the end we got it together to travel there on Thursday and I am so glad we did. Dave recollected reading somewhere online that, for preserved Roman structures, touring southern France is far more rewarding than visiting Rome and we are both coming to agree with that opinion. Not that we didn't like Rome. We did!

Arles has a number of more unusual historic attractions and we took advantage of their good value multi-site pass. Priced at €11 per person, the Pass Liberte allowed us to visit four monuments of our choice, the Musee Reattu and a further museum of our choice. As it turned out, we only got around four monuments in our afternoon. However the tickets last for a month so I have kept them in case we choose to make a return trip next week. They have two images of Arles monuments on the backs too so I have blu-tacked them up inside Bailey in the meantime.

We began at the Alyscamps necropolis which was world-famous in the
Middle Ages even gaining a mention in Dante's Inferno. Begun as a Roman cemetery for well-off citizens, Alyscamps remained in use and fashionable for some 1500 years. The 4th century Saint Genesius is reputed to have been buried there after his execution for refusing to persecute early Christians so the necropolis was a cult focal point for him. There is also a large Campostela sun at the entrance because Alyscamps is on one of its pilgrim routes. Nowadays the site comprises of a fascinating single road of sarcophagi in various states of repair leading to the imposing church Saint Honorat. It isn't at all spooky in daylight and, being there in Autumn, we got to see it pretty much as Van Gogh and Gauguin did in October 1888. There is a Van Gogh trail around Arles with reproductions of his relevant paintings displayed in the places where he painted them.

After a quick stop at the Tourist Office for a map, we paused at the Coffee
Me coffee shop for a good hot chocolate before Monument Number Two - the Cryptoporticus situated underground below the Hotel De Ville. I think this was my favourite of our four monuments as I have never seen anything quite like it before. Essentially the foundation level of the ancient Roman Forum, this is now several metres below street level and was surprisingly warm. We were able to walk along the Roman porticoed 'streets' and also saw where small shops would have been. The Cryptoporticus extends way beyond the present-day Hotel de Ville although not all of it is open to the public. It was easy to imagine Romans being exactly where we now stood, especially because of the almost complete absence of distracting modernity. The lighting throughout was kept pretty dingy, presumably for conservation reasons, so photography on my phone was difficult and I only achieved this single successful image.

We both liked the relaxed vibe and general tattiness of Arles. There was a 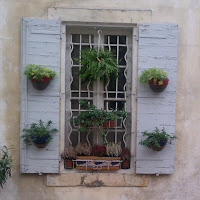 smattering of souvenir shops and we did manage to frequently dodge a large school group, but Arles didn't feel like a tourist town. We could have spent much longer wandering the interesting streets and soaking up the atmosphere, as well as visiting the numerous art galleries which were barely acknowledged. The Van Gogh Foundation was one we considered, but their main exhibition was of David Hockney. Having been underwhelmed by his work at Bilbao's Guggenheim a few years ago, we passed!

Lunch was a cheese and ham crepe with coffee at a cute little cafe called Le Petit Arles. It only seats about a dozen people and we were the sole customers for much of the time which gave us a chance to chat with the owner. He noted down a few other historic French sites we should make a point of visiting so, although we can now tick off Arles, our To See list has still grown.

There isn't much left of the Roman theatre. It is mostly the semi-circular
stone seating and a couple of tall columns with a precarious lintel at the back of the stage. Off to the side, piles of decorative stone and column segments are awaiting their reconstruction like a fantastically complicated and heavy jigsaw puzzle! Finance has been agreed, in a budget of over €100 million, for restoration of both the theatre and its neighbouring amphitheatre, but I didn't notice mention of a projected timescale. It is miraculous that anything survives at all though. A signboard showed an 1800s sketch of the area with houses built on it and just a sort of courtyard where the modern stage is now erected. The theatre space is now used again for its original purpose. A large wood clad lighting and sound box has been sympathetically added as well as matching bathrooms. The site is definitely worth a visit but I was glad that we had already visited the completely renovated Sagunt one as that gave a much better idea of the Roman staging and practicalities. Arles' is light on real information.


Also lacking in information, especially after the superb audioguide tour of
Nimes' one, is Arles amphitheatre. We could see over to the amphitheatre from the theatre and it was just a couple of minutes walk away. Again now used as a bullring, the amphitheatre is perfectly functional and has wood and metal seating bolted to the Roman stone benches. An unusual feature is the three huge medieval stone towers - one at each compass point with the fourth having since been destroyed. In the middle ages, like at Nimes, housing was built inside the amphitheatre making it into an easily defendable fortress town. There's a great view from the top of the tower we climbed. Apparently the Roman top tiers of seating no longer exist so the structure rose even higher than it does today. I was seriously impressed by trying to understand the skills needed not only to create such an incredible building two thousand years ago, but to even imagine it and then replicate the design in so many different locations across an empire. 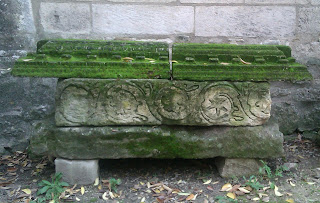