Walking around Lavalduc and its lake 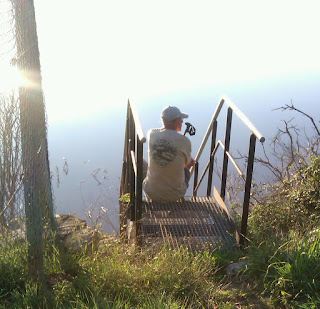 least a dozen mosquito bites. I don't react well to them and tend to get woozy if there are too many at any one time. Unfortunately l'Etang de berre has a large population of the buggers and they happen to like our campsite too! Despite the sunny weather I've been staying inside as much as possible so it was nice to go for a rural wander yesterday afternoon around a relatively bug-free lake! It's not possible to walk all round Lavalduc lake so we went as far as a railway line in one direction and a big sluice gate in the other. I love this image of Dave sitting gazing out over the water!

amazed to spot this ruined aqueduct ahead of us. I wondered if the modern Lavalduc is a contraction of Le Viaduc? There are only three complete arches now and the pillars continue off into the distance. It was quite weird just seeing this out in the middle of nowhere! 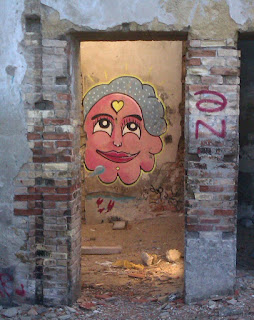 waterside. It had remarkably thick external walls with what looked like yellow sandstone around where the windows should have been. It looked like people had used the ground floor for dossing and there were plenty of broken beer bottles, but someone had painted this fun street art image too.

The lake was beautiful in the late afternoon sunshine. We later learned that it is artificially made salty for some industrial purpose, but we couldn't find out exactly why. I was surprised to not see any waterbirds at all although there were a few small finches flitting around. We also saw what we think was evidence of wild boar rooting around. 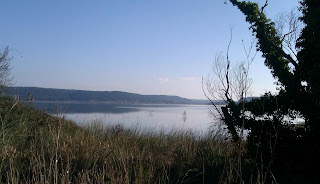