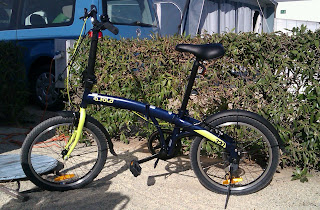 Just a quick post today which I hope might prevent any other Btwin (or similar) folding bicycle riders from finding themselves flying through the air (with rather too much ease!) as I did earlier this week. Apart from a beautiful purple and yellow bruise where a handlebar ended up punching me in the stomach, I am ok, but it could have been a much worse situation.

My accident was caused by the bicycle's brakes unexpectedly putting themselves on without my wanting them to. This bike actually has good brakes so it suddenly stopped dead! We worked out that when I had unfolded the handlebar stem prior to riding, I had failed to spot it had whirled around 360° from where it should be. The wheel was facing forwards, but the brake cables were wrapped around the upright. This might make more sense visually: 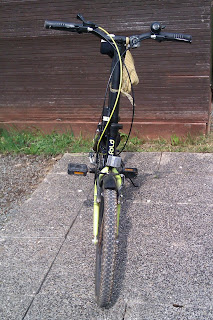 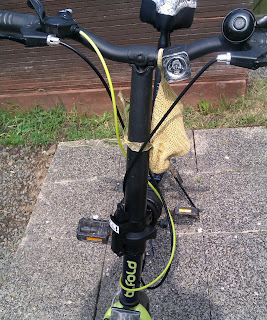 In the first two pictures, the brake cables are away from the upright stem - as they should be. In the third picture they're wrapped around it. This was so easy to do without noticing, that I am amazed I never did it before! The brake cables were already so taut that just turning the handlebars a little bit to the left slammed on the brakes.

Fortunately, at the time, we were cycling fairly slowly on a softish dirt track and there wasn't any traffic. I went flying off the bike though - my first proper fall since the childhood one that put pay to my cycling for a couple of decades. However, this time I just scuffed my palms and knees, and got the aforementioned bruise. My bike only sustained a bent mudguard which Dave was able to straighten out relatively easily before we carried, gingerly, on our way. Oops and Phew!
Posted by Stephanie Jane at 17:38