A Roman history day in Nimes

Nimes is justifiably very proud of its Roman history and has the best
preserved amphitheatre from that period in Europe as well as a complete temple - the Maison Carree - and numerous other monuments and structures. We had to drive there from Avignon as the 40 euros SNCF wanted for two return train tickets was deemed 'beyond budget'. We didn't get to see the famed aqueduct out of town for the same reason: 18 euros per car to park nearby to it is reasonable if you have a car full and want to make a day of it, taking advantage of all the kid-friendly attractions too. However it is the same price to park up, wander about for fifteen minutes and snap a couple of photos - there's no in between! As we have already seen a superb double-layer aqueduct at Evora in Portugal, we passed by Nimes' example.

Instead, once in town, we bought a Pass De Nimes each which is a three- 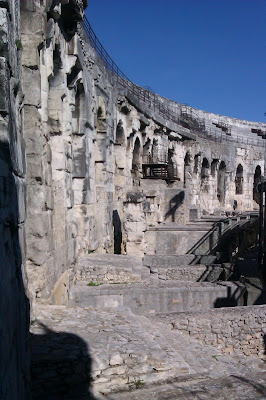 day ticket giving access to the amphitheatre, Maison Carree and Tour Magne for a combined price of €11.70. This turned out to be excellent value even for just a one day visit. The amphitheatre at Nimes is an amazing example of the sophistication of Roman architectural engineering skills. It measures 133 metres long by 101 metres wide by 21 metres high and is a perfectly symetrical oval. In Roman times it could seat 24,000 spectators all of whom had a clear view of the bloodthirsty entertainments enacted in the arena below. I highly recommend getting yourself an audioguide for the amphitheatre. It is included in your ticket price and provides interesting commentary, history and other information. There are wall panels giving information too, but we were impressed with the audioguide narration. It took us over two hours to complete the tour, although time flew by as we were fascinated by what we saw and heard. Muscles in my left leg are still incredibly sore from all the ascents and descents of stone steps and staircases - you do need to be pretty mobile and this isn't an ideal attraction for young children unless they are small enough to be carried everywhere. I was disappointed to learn that the amphitheatre is still used for bullfighting several times a year too. I guess the revenue from that is the reason the structure is maintained so well, but I think it would be better for all the blood spilt in the arena to have been historical, not still practiced.

We stayed way past lunchtime in the amphitheatre so our wander of the narrow 'old town' streets was distictly food oriented. There are lots of restaurants but not so much in the way of cafes for lighter bites. We were just about fainting from hunger (not literally true!) when we stumbled across Maison Villaret which is a patisserie-chocolaterie-cafe which has a half-dozen or so little two-person tables inside for sipping coffee at and awaiting a plate of the delicious cakey creations. My favourite of the three we tried (between us, not each!) was the Imperatrice - a rich chocolate mousse slice with a chopped pastacio and hazelnut layer.

Once fed and on a slight sugar high, we arrived at Maison Carree which
is a preserved temple to the Roman Emperor Augustus. This Emperor was especially important to Nimes as he granted the town colony status enabling it to become the most important community in the area. While the facade looks wonderful, inside is simple plaster with no hint of the building's religious past. It has been used for many other purposes over the intervening centuries. Maison Carree is now a cinema showing just one film - a well-made but slightly naive presentation of the town's history. We meet Adgennix a BCE local inhabitant who leads his tribe alongside the Roman army against other Gauls from the north and becomes rich and famous as a result. This allows him to return to Nimes, after a period of some twenty-five years, and build the fabulous city it would become under Roman rule. We both loved the self-erecting walls! The film is in French, and has good English subtitles throughout.

Running out of time, we never did get up the hill to Tour Magne, instead
being diverted by the lower levels of the 18th century Jardin de la Fontaine which was built around a much earlier Gallo-Roman sacred spring. This huge public space is a mix of statues and porticoed pools, wide tracks for promenading and cycling and grass areas for games or just lazing around. At just after five o'clock on a sunny evening, the park was pretty busy.

Within the Jardin de la Fontaine is the now ruined Roman 'Temple of Diana'. Archaeological excavations here have uncovered evidence of further worship of the cult of Augustus and absolutely nothing to indicate worship of Diana. Also current belief suggests that this building is likely to have been the library of a religious complex, rather than a temple in its own right. However, I guess the name is traditional so it has stuck. The temple is open to the public and free to wander around. There's very little information on site, but is is still an impressive structure and a fair amount of detail remains visible.