Buy the ebook from Amazon.co.uk
Buy the paperback from The Book Depository

I received a copy of Deus Ex Machina from its author, Lee Ness, in exchange for my honest review.

The first thing that struck me about Deus Ex Machina is its eyecatching cover which, I learned, is also the work of Lee Ness. It's a great image.

This novel doesn't waste any time with scene setting in its early pages, instead leaping straight into the action as we meet our heroine, Rachel, working her cybermagic to entrap a child abductor. I liked Rachel very much. She is witty and skilled at her occupation, doesn't play the docile female, and also has realistic flaws. Her relationship with Cam was always believable, although I did think their banter was overdone. Practically every remark contained an innuendo making it more Carry On than 24. (A lot of films and tv series' get namechecked which is fun to spot.) I feel that this is just as much a book for female readers as male, primarily due to the well-drawn female characters.

I don't have much idea how accurately the actual hacking was portrayed so just happily took everything at face value and went along with the thrilling ride. Deus Ex Machina has great pace throughout, only slowed a little by the political arguments and this was vital to the plot so excusable. Supporting character Dave adds a nice edge, particularly in the second half.

There were quite a few typos etc. which distracted my attention and I think I would have liked to have more time to 'meet' Rachel initially. Light descriptions meant my impressions of locations were always generic, rather than specific to this tale, and the concluding scenes felt rushed. However, I enjoyed the book and would read more books by Ness. 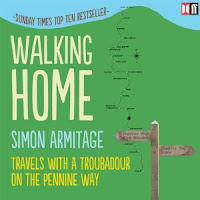 Walking Home: A Poet's Journey by Simon Armitage
My rating: 4 of 5 stars

I hoped downloading a poet's journal of walking would give me a different viewpoint to my previous walking-related listens and reads. So I was pleased with Simon Armitage's recounting of his Pennine Way expedition as it does just that. He has a fantastic turn of phrase when describing the landscapes through which he passes. I particularly appreciated the "garrulous river" and "sticky toffee pudding track" amongst others. His approach to the Walk was refreshingly different too - he has actually prepared and researched so there is none of the forced humour of things that are bound to fail which I found a bit irritating in other books (Clare Balding take note!). Hearing Armitage read his own words is a bonus as, although he is not the most polished narrator, his remembrance of each day shines through the audio. The included autobiographical snippets are interesting and the interspersion of the serene and not-so-serene poetry readings adds a real contrast.

I liked that Armitage comes across as a real person rather than a manufactured celebrity. He is not always happy and smiley to 'his public', and his occasional discomfort at lodging in other people's homes, and therefore having to put on a good face after an exhausting day, is easy to empathise with. He often walks with genuinely interesting company, instead of the TV staple of entertaining eccentrics, so I also learned a lot about the geography and history of the Way.

We are booked at a caravan site near Kinder Scout in May so I will definitely be visiting a short stretch of the Pennine Way and plan to relisten to Armitage's account of the relevant bit beforehand. I liked how each chapter was a day's walk and began with details of the start and finish, distance, and map pages. I have been almost completely discouraged from making my own attempt on the whole route. It sounds a wonderfully romantic venture, but the realities I listened to dampened my enthusiasm as fast as the rain soaked his clothing!

The Snows of Kilimanjaro by Ernest Hemingway
My rating: 3 of 5 stars

As a first taste of Ernest Hemingway's writing, I am not sure that The Snows Of Kilimanjaro and Other Stories was the best place to start. There are eighteen stories in the collection, but some are as short as just a couple of pages so read more like a single scene than a self-contained tale. I liked the title story which has a great sense of its place and time. Hemingway's sparse prose suits the repressed emotional interplay between the characters and the ending was both unexpected and poignant. I was less taken with the series of Nick Adams stories. I was able to picture their poor, rural environment, but felt the characters only rarely sprang to life. I understand from other reviews that Hemingway himself was very much a man's man so was unsurprised by his sexism. There is significant casual racism too which dates the writing. Each story begins with an apparently autobiographical paragraph. I liked reading these but am unsure whether they are meant to relate to the following tale or are simply interludes.

I will definitely read more Hemingway as I liked the writing style. However, I think I shall make sure my next of his works is a full length book to give me more chance to get to know and understand the characters he has created.