Cycling from Benicarlo to Peniscola

After the shock of a rainy day on Friday we made the most of Saturday's glorious sunshine by taking our bicycles to the beach. Camping l'Orangeraie is a little inland, but it's only about a fifteen minute drive to the coast. We parked up just outside Benicarlo to do a cycle ride that Dave had planned along the seafront. There is a dedicated cycle path linking Benicarlo with Peniscola.

Initially bicycles have to share the road through the edge of town, but even on a Saturday morning there wasn't much traffic and Spanish car drivers are very good about giving cyclists a wide berth. I always feel far safer cycling on roads out here than I do in the UK. Soon though we saw the cycle path start up on the left pavement from where it continues for about five miles. Although the space is shared with pedestrians, the separate spaces are marked with white lines that were generally well observed. The coast is perfectly flat and we were lucky with only a light breeze so the cycling was a pleasure in both directions. The promenade was considerably busier with cyclists and pedestrians in the late morning. Returning mid-afternoon we practically had it all to ourselves.


Peniscola was a pleasant surprise as, although right down by the beach is built up with modern hotels and apartment blocks, the old town climbing the hill to the castle retains much of its charm. It's not such a steep climb as in Onda and we were both reminded of Mojacar pueblo although I couldn't say exactly what prompted me to make that connection. We didn't pay to go up the castle itself, preferring to explore the outer walls and the town itself. One street was overfilled with touristy tat shops, but the narrow residential streets are peaceful and pretty and almost all surfaced with small cobbles. We lunched TexMex at La Frontera. The food was ok, but not a patch on the decor which was great fun. I especially liked a door curtain made of upcycled beer bottle caps.


The baroque Valencian style church high up in the town is named for the Virgin of Ermitana. Tradition has it that a small hermitage stood on this spot in the first years of Christianity and over the centuries that dwelling was rebuilt and rebuilt until it grew into the 18th century edifice we see today.

Peniscola is proud of its cinematic heritage and has signboards dotted throughout the streets showing where scenes from films such as El CID were located. A dedicated map for cinema fans is available at the Tourist Office. We unexpectedly strolled through a Juego de Tronos (Game of Thrones) courtyard location too, albeit for a season we haven't seen yet so I will have to remember to watch out for Varys and Tyrion in Meereen! They would have had this amazing view across the bay from the walls above their heads. 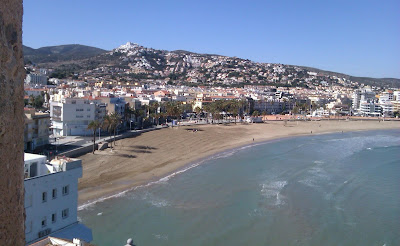