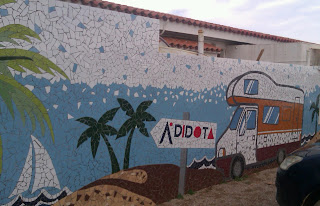 I will admit that we almost turned around and drove away from Camping Didota on arrival. It is so different to Camping Ametlla that we weren't convinced we would like being here. However a combination of not having enough details of a nearby alternative and the fact that I would have struggled to manage a three point turn in the street outside meant we decided to give it a week and actually, now we are settled in, I think we may well be here even longer than that. Our minds were changed, of course, by the fantastic park I blogged about yesterday.

Arriving at Camping Didota from Camping Ametlla on Friday afternoon reminded me almost exactly how I felt around this time last year when we drove into Cambrils' Camping La Llosa from Camping Casteillets. From a pretty and almost deserted place with large, hedged pitches, we are now effectively in a busy gravelled car park. There are pine trees here, but their greenery is high above us. It's by no means a bad site though - just a bit of a culture shock! Our €15 per night ACSI price gets us a pitch with 4kW of 10A electricity per day, good quality wifi and access to the usual water, waste and sanitation facilities. We are within a minute's walk of the beach and can easily walk or cycle to shops. We were surprised by just how busy this campsite is. It's open all year and seems to specifically cater to northern Europeans so all signage is in four languages - Spanish, German, English and French - which is a great way to learn common phrases multilingually. I don't think there are actually any Spanish pitched up here. We seem to be mostly German, Dutch, French and Brits.

Where Camping Didota is unusual is the range of extra facilities and activities on offer. The restaurant is open and has special menus on certain days, music evenings and a tiny onsite shop. We saw on Didota's Facebook page that the Flamenco singers packed the place out on Friday! We could also sign up for yoga or aquafitness classes. The swimming pool is open every day, as is the jacuzzi, the gym and the television room. Six nations rugby anyone? There's even a whole room set aside as a library! Yet the campsite is relatively peaceful most of the time and practically silent after about 8pm. Whether we will get involved in any of the activities remains to be seen, but we might well allow ourselves to be tempted by the €10 menu del dia! 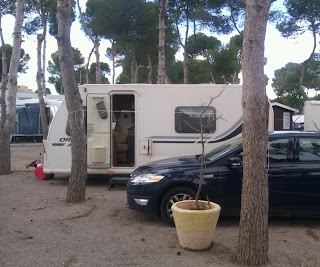