Our Valentine's Day in historic Onda

Did we do something stupendously romantic for Valentine's Day this year? Well, er, no actually. For the first time we didn't even get each other a card although, to be fair, the Spanish don't go in for greetings cards in the same way Brits do so finding decent designs is a nightmare over here. We decided to put that cash towards a nice lunch out instead to celebrate our fourteenth Valentine's Day together (and Dave's eleventh anniversary of quitting smoking!)

A very nice lady at Oropesa Tourist Office told us about Onda, whetting our appetite to visit. We began by struggling to find somewhere to park in its maze of a one-way system and, that finally achieved, walked steeply uphill through the narrow streets of the old town towards the Moorish castle on the hill.

Onda's Castle was first built in the 10th century and covers a large site overlooking the town. It has three distinct areas, the central one of which was the Alcazaba fortress-palace from the 11th century. The castle was once said to have a tower for each day of the year and although that wasn't quite true, its towers did number over three hundred in the castle's heyday. Now it is mostly ruins and an archaeological site with a few towers and walls renovated to give an idea of its former glory. Onda's castle is free to enter and there is also a small artefacts museum onsite although this wasn't open on the day we visited. It was still an interesting place to wander around. Informative placards explained the significance of much of what we saw and the views out over the surrounding town and countryside are breathtaking.

We were given a small Onda map at the castle which included a suggested route through the oldest part of the medieval town taking in the old Muslim and Jewish quarters. Onda still retains a picturesque sense of its history in this area and we enjoyed a coffee in the arcaded Almudin Square (pictured above). Nearby streets retain a few heavy medieval wood doorways. The Muslim community lived in some 50 houses, an area known as the Moreria, until their expulsion in 1609. The pictured St Vincent Ferrer's Chapel was built on the site of the former mosque. The Moreria neighboured the Aljama, the Jewish community, until Jews were expelled in 1492. Nowadays only the remnants of a gate jamb remain to mark the old Synagogue Gate in the town walls. No one is exactly sure where the synagogue stood. 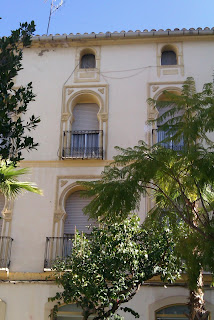 We got lucky with our lunch spot after a good walk around. I loved the decoration of buildings which includes painting and tiled frescos. Several of the restaurants were closed for the season and we didn't fancy resorting to pizza, but eventually stumbled upon La Taperia de Nati. This functional bar-restaurant was advertising a three course Menu Del Dia, but we had no idea what we would get! Unexpected lunch is what passes for excitement in my world! After some understanding of what we were being offered and some complete lack of comprehension, we ended up with two shared starters - Potatoes And Beans and Broad Beans With Bacon - two main courses - Bacalao for me and Pork for Dave - two desserts - coffee flan for me and chocolate cake for Dave - plus salad and bread, beer and wine, and coffees, for the grand total of €8.50 each. Incredibly good value and very good food!

Then after lunch we retrieved our car which, by accident rather than design, was just around the corner, and drove a little way out of town to the Tile Museum. Like the views from castle, I think this Museum should be an essential part of any visit to Onda - and I will blog about it tomorrow! 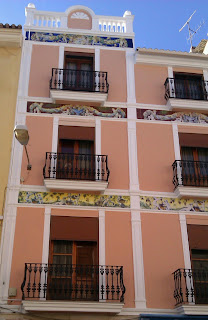