We visit the historic walled town of Sant Mateu

Sant Mateu is mentioned - alongside Vilafames, Onda and Peniscola - in our Castellon Day Trips And Getaways book as one of twelve towns to visit in order to comprehensively discover Castellon province's history. Over thousands of years Castellon has been home to Iberians, Phoenicians, Romans, Arabs, and chivalric orders such as the Knights Templar so there are traces of an incredible diversity of cultures here.

One of Sant Mateu's prides is 260m of Montesian style masonry walls which are certainly an impressive sight. This section was restored in 1995. Originally 1600m of wall encircled the town at an average height of 6m. It was built between 1357 and 1380 and was the second significant enclosure to be constructed here. An earlier wall protecting the then much smaller settlement around St Peter's Church had been built in the 13th century.

We enjoyed strolling Sant Mateu's streets and noting interesting details such as heavy doors and intricately tiled balconies. There seemed to be a disproportionate number of town houses for sale here, especially away from the centre, with many being in a very poor state of repair and numerous renovation companies at work. A far cry from the town's heyday when it was a rich commercial centre particularly famed for its wool which was exported as far away as Florence! We even saw one demolition site where parts of a kitchen interior - tiled walls and a sink - were still attached and hanging from where a second storey apartment no longer stood. 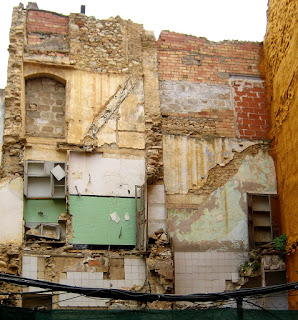 Other more official sights we explored included the public laundries two of which exist and one of which is still open and even appears to be used. We also popped into both churches which were remarkably not-gaudy and gilted, and peered up at the bell tower, unusual due to its having eight-sides. Sant Mateu council has arranged for small placards at most of the historic sites of interest. Written in several languages, including English, they give a good idea of the town's past and meant we were never in need of a guidebook - which was great because the Tourist Office is shut on Mondays!

In contrast to the dilapidated exterior, Sant Mateu's main town square and surrounding streets were an uplifting bustle of commerce and leisure. We sat outside a cafe near the Angel Fountain watching the world go by and soaking up the sunshine, both thinking that this would be a lovely town in which to live! There are predominantly independent shops including several small bakeries, greengrocers and butchers, and the views out over the surrounding agricultural land are beautiful. Sant Mateu is about a half hour drive from our current Calig campsite and we are considering returning on any-day-but-Monday to perhaps explore the museums and treat ourselves to a €12 Menu del Dia lunch!