We're making our own laundry powder! 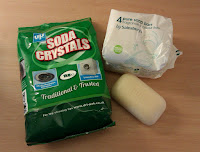 And you're probably thinking why bother? Well, we're trying all sorts of ideas to minimise our environmental and financial impact, plus I read a post on the Australian Blah Blah Magazine blog about reducing air pollution in the home. Dave is prescribed inhalers so it makes sense for us to avoid as many potential irritants as we can. We already don't use air fresheners or that sort of thing, preferring to just open windows instead as we live in a part of town where, as long as the neighbours aren't having yet another bonfire, the fresh air is clean with a slight hint of the ocean. 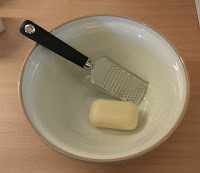 The recipe for laundry powder is so ridiculously simple that it is not even really a recipe at all. There are two ingredients, washing soda and natural soap, in two to one proportions. We bought a 1kg bag of soda crystals for £1, a 4 bar pack of unscented soap for £1, and a grater for £4. I did think about using our existing cheese grater but, probably irrationally, found the idea a bit icky so bought a dedicated grater for the soap. Your first task, should you choose to play along at home, is to weigh a bar of soap and write its weight down. Then grate it into a bowl. This is good exercise for the arm muscles(!) and only takes a few minutes to do. With the volume of laundry two people create, the resultant flakes will last for weeks too so this isn't a job that needs to be done often. 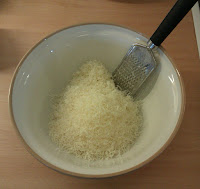 A word of warning if you have small children (or a boyfriend), grated soap does look exactly like grated cheese so beware of people trying to sneak a taste!
I didn't write the soap weight down so weighed it again, then added double that weight of washing soda to the soap and mixed it together very well. I put mine into a locktop plastic tub and shook it up for several seconds until I could no longer see a separate powder layer. I ended up with 128g of soap and 256g of washing soda so mixed up almost exactly a quarter of what we bought. That's 50p's worth of laundry powder created, plus the grater which I can use again (and again ...) 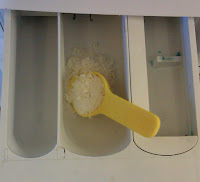 When I was ready to do a load of laundry, I put just 2 tablespoons of the homemade laundry powder into the usual tray (or ball or whatever you use). It seemed far too small an amount and I was tempted to add more, but thought I should follow instructions at least for this first time and see what happened. I didn't use any other product in with the wash. 2 tablespoons was enough for a full load in our machine and the laundry came out perfectly clean. It smelt fresh, but not scented which will take a little getting used to. There weren't any white residue marks on dark items and the fabrics all felt soft and clean. Success! I'm definitely a convert to homemade laundry powder.

I have read of people who absolutely must have scented washing adding essential oils to the mix. The best way to do this seems to be to put a few drops of your chosen oil on folded kitchen roll and keeping said kitchen roll in the sealed laundry powder tub. Adding the oil directly to the powder will just make it clump together. The effects of fabric conditioner can be apparently replicated by using a half cup of clear vinegar. I didn't use this myself, so don't know how effective it would be or whether clothes would emerge smelling like a chipshop!

So, our verdict is that this homemade washing powder certainly does the job and the grating effort is worthwhile. 2 tablespoons of powder weighs about 20g so we should get eighteen washes for each 50p's worth of powder - a fraction under 3p a wash and with no nasty chemicals to infiltrate our clothes.
Posted by Stephanie Jane at 08:00