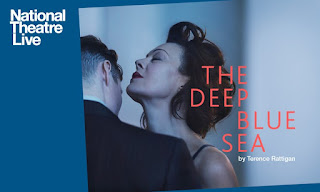 Did you catch the National Theatre Live broadcast of Terence Rattigan's play The Deep Blue Sea yesterday evening? Wasn't Helen McCrory superb?! If you missed it, there are a scattering of encore screenings in the next few days so do grab a ticket. I know of an Exeter screening on Tuesday 6th September and Teignmouth on Wednesday 7th and details of venues further afield are on this page of the NTlive website. The Deep Blue Sea was surprisingly understated compared to other production broadcasts we have seen. Most of the emotion was simmering just under the surface in that wonderfully repressed 1950s way. I loved the set which is a recreation of a whole boarding house complete with its lodgers in each room who we see through the paper-thin walls. For me, this made the centre stage, which is Hester and Freddie's flat, feel more like a zoo cage than a home which added greatly to the tension of the play.

As well as being the first time I have seen The Deep Blue Sea, yesterday was also the first time we had visited the Central Cinema in Torquay. We were worried that it might be as run down as the Curzon in Eastbourne had been, and not a patch on the Barn Cinema at Dartington where we saw A View From The Bridge in May. This would mean longish drives for our event cinema excursions whereas we can walk to and from the Central Cinema in about twenty minutes each way. The venue is a little shabby, but has comfortable seats with lots of legroom and good sightlines to the screen. For this screening anyway, it was also so quiet that we had no trouble choosing and buying our interval treats and getting back in time for the recommencement of the play. Very different from several Eastbourne Cineworld experiences!

I think our only real criticism - which is amazing for a cinema - is that the staff could have set the volume a little higher. Other people chatting in the interval remarked that event performances are often too quiet whereas standard films are expectedly over-loud! We like the Central Cinema though and plan to return there for the next NTlive production later this month: The Threepenny Opera. See you there?