We learned today that our Dutch neighbours have been wintering in St
Jean Pla De Corts for fifteen years and, despite invitations to go further south into Spain, they are quite happy still exploring and discovering everything there is to do in this little corner of France! They are also keen walkers so we swapped recommendations including, for us to them, Hike No.1 in our Little Guide of Hiking which we undertook on Wednesday. Entitled Chemin des Mas, the walk is a 13k circuit from Pont-de-Reynes and passes by a number of Mas which are large agricultural estate houses. Traditionally, everything needed for the large farm house would be contained under a single terracotta tiled roof with the number of lean-to outbuildings surrounding it being a sign of prosperity. The French word 'Mas' is often substituted locally with 'Can' (meaning chez and probably from the Spanish con), or with 'Al' (meaning at and probably from Moorish Arabic).

instructed to look for appeared at a glance to just lead into someone's garden. Fortunately a local woman came rushing over to poin us back in the right direction - we didn't seem to be the first to have missed it!

The first half hour or so was uphill passing over a levada and on through cork oak woods. This walk had a different vibe to our previous two because we were led along narrow footpaths rather than wide vehicular forestry tracks. We saw lots of bright yellow gorse flowers and a few butterflies, but otherwise very little in the way of wildlife. There was pathside evidence that wild boar had been rooting around.

A winding shaded road took us through the village of Reynes which had some lovely houses set back from the traffic. The village appears almost piled on top of itself as it is strung out along the zig-zagging road. We saw cherry orchards which must be absolutely beautiful in Spring when all the trees are in blossom, but were unsurprisingly bleak in December!

Another feature of the locality is its narrow old stone bridges. We saw three on our journey and I took the below photograph of Dave standing on one before a couple of dogs came rushing up barking at us because we weren't exactly on the public footpath. Once we got back where we 'should' be, they got bored and loped off! 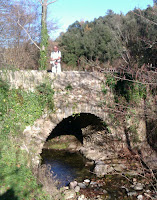 Chemin des Mas was another good workout walk with not much ground that seemed flat, but a mix of uphills and downhills so it wasn't too easy or too exhausting. We took about four hours in total, not including our picnic stop, so were a little longer en route than the book's stated 3h40. 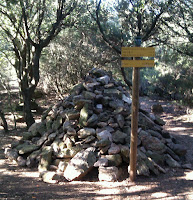 walking route selection. Their booklet is nowhere near as nice and professional as Le Boulou's though - and we had to pay four euros for it! We drove out to La Vall along a fortunately-quiet single track road, then a half-kilometre of dirt track to the 'car park'. Once there, we abandoned our newly acquired booklet in favour of following the signs right in front of us, one of which pointed to Tour de la Massane. This walk was an out and back or, more accurately, an up and down and we were pretty pleased with ourselves for getting all the way to the PR route along the ridge and back, even though we didn't quite reach the tower. I added a small stone to the huge cairn that marks the top! Dave found a drawn image of the walk online - on this Argeles-sur-Mer Tourisme page.

Although much of the path was through forest making the only possible
view that of trees and more trees, we did get to gaze out to sea from the very top. And our lunchtime picnic view was over Collioure, a town we enjoyed visiting probably about ten years ago in our tent camping days. I remember there was a frame on a stick on the harbour front through which visitors could look to create their own temporary pictures of the views. I wonder if it is still there?
Posted by Stephanie Jane at 19:34