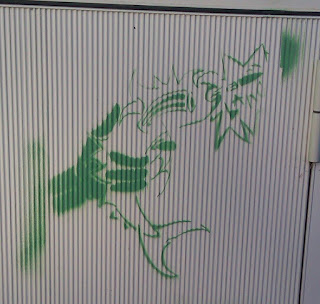 advantage of it today to cycle from our St Jean Pla De Corts campsite all the way to Amelie Les Bains, a distance (we think) of about 14km each way and almost entirely on the Voie Verte which is the superb cycle route we followed in the opposite direction on Tuesday. There's apparently over 300km of this particular route in total.

We joined the Voie Verte a few minutes from the campsite and were immediately taken away from all the traffic on a bicycle and pedestrian only path that leads out into the countryside. We passed the Chateau d'Aubiry again and it isn't possible to get close enough for a decent phone photo, but Wikipedia has a good picture. The route surface is mostly newish tarmac or concrete and, other than a few very steep inclines away from fords and the like, it is practically flat. We got to the next town, Ceret, far quicker than we thought we would so decided to extend our ride to Amelie Les Bains. We paused for a few photographs in Ceret though.

There is a trio of bridges over the majestic river Tech in Ceret. This
photograph is actually taken from the most interesting of the three - the 14th century Pont Du Diable which at the time of its construction in the 1320s was the largest bridge arch in the world. The arch is an incredible 45.45 metres across and 22.3 metres high. These days it is only open to pedestrians and cyclists with other traffic being directed across the much newer, 1939, bridge next door. The third one in the picture is for the railway which was completed in 1883. An information board by the Pont Du Diable displayed a painting by Auguste Herbin who visited Ceret in the 1910s and 1920s. To be honest, if it hadn't been for the board's location and description I would not have recognised the bridge (or even that it was a bridge!). We plan to return to Ceret to see more of the art trail around town and also to visit their Modern Art museum.

The Voie Verte uses a dismantled railway line for much of its distance
between Ceret and Amelie Les Bains. I didn't like cycling across the old railway bridges as they were high with low fencing either side! At one point the route goes through this Pont du 19 Aout 1944 which you can see in the background behind its memorial plaque and stone to the Resistance fighters who confronted a convoy of German trucks here. The link above goes to a French blog talking about the bridge. We didn't know to look for the bullet holes until I began researching information back at home.

Parts of this bit of the journey were suddenly very cold as we found ourselves under the cliff face. I don't think the sun gets high enough to warm the air there at any time of day in winter!

Once in Amelie Les Bains, we stopped on a sunny bench to enjoy our apples and ham sandwich before visiting the Tourist Office for yet more walking maps and the Post Office for a few stamps. We treated ourselves to a coffee too, but didn't have any proper exploration time as we had to start our return journey to guarantee being home before dusk. I must put those lights on my bike! I need to do a bit of servicing on it too. We had to stop during our last ride as one of my front brake pads came loose, and today the spring that holds the centre fold together came undone. I thought the bike felt a bit odd for a while - it was trying to separate in the middle!