L'Aleixar to Vilaplana - our last Spanish walk of the season

La Llosa, towards the end of this week and head back into France. The weather here has turned distinctly English - it's raining! - so our last good walk around here will have been the 13km circular route we took on Saturday beginning and ending just outside L'Aleixar and looping past Vilaplana. The walk is number 13 from the Baix Camp Senderisme map (available at Cambrils Tourist Office). It was tricky to find the start, but once we were underway most of the route was clearly marked and signposted.

Just outside L'Aleixar the Ermita de Sant Blai is signposted 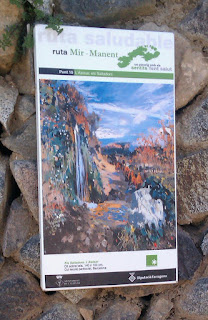 up a white track on the right side of the road. There is a little car parking by the Ermita, but we had already taken advantage of a patch of rough ground by the small playground off to the left of the main road. From here we walked up to the Sant Blai Ermita and all around it, disturbing a couple of radio hams and completely failing to find the start of our path. We eventually discovered that we needed to face the Ermita then take the path on our right which heads towards town through allotments. Once at the large dry riverbed we saw the first of our green footpath signs. Slightly confusingly, another route crosses through here and we spotted points 19 and 20 of the Ruta Mir Manent - a touristic walk taking in locations important to the local painter Joachim Mir and the poet Maria Manent. The waterfall in this painting has now been replaced by a large ugly grey pipe. (If you're here and want to do our walk, head away from the river and then take the right fork away from the Ermita.)

Much of the early route is on wide camis through 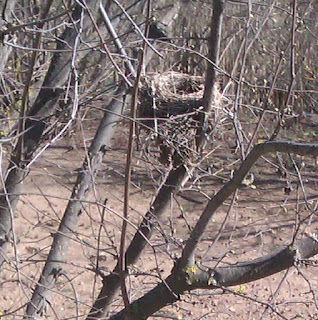 agricultural areas that include hazelnut and olive orchards. Most of the nut trees were beginning to sprout leaves and others more distant which looked like cherry trees were in full blossom. Dave spotted this little bird's nest in a budding tree. We headed steadily uphill for at least the first hour of this four hour walk. None of the gradients were particularly steep but the incline was pretty relentless and the track was often quite rough having been washed away by rainfall in previous years. There were superb views out across the countryside from the heights. 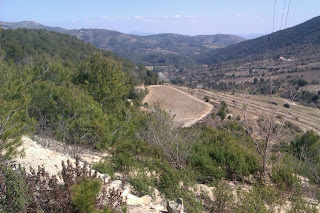 Once up this high, the tracks narrowed into single file sandy footpaths which wound through pine woods and past yellow flowering gorse bushes. We saw several butterflies including the bright yellow and orange ones that are our favourites here. The silence up on the hills was incredible. Sometimes we could hear birdsong, but mostly there seemed to be no sound except for our boots and the occasional rustle of a rapidly departing lizard. 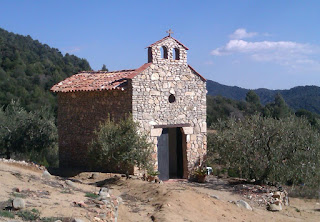 far from the Vilaplana sign pictured above. Setting out again after half an apple and a sandwich, we found ourselves again passing agricultural land. Several fields had stone shelters in them and we were amazed to discover that one particularly smart one was actually an Ermita. The Ermita Santa Maria De Mascabrers was set at the edge of a field of olive trees just below the path. A bright yellow sign told us that "La porta resta oberta per la pregaria i la oracio" so we took that to mean curious hikers could visit too! Inside was beautifully simple - whitewashed walls with an elegant peach painted border, six basic chairs pushed against each side wall and the altar at the front. It was refreshingly cool inside and felt serene. 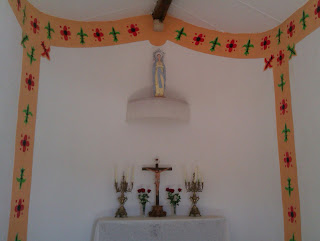