After one chilly electric-free night back at Camping Les
Casteillets (using our heater on the gas is like trying to sleep over an aeroplane - as it takes off!), we were hoping to pitch up until after Easter at Camping du Lac de la Thesauque in Nailloux. Unfortunately on arrival we learned that the pitches there were still so soggy that the site itself isn't open to touring caravans yet. Instead we were invited to use the €6 a night motorhome area which is basically the car park! However the tarmac was level, it was peaceful with just one other occupant, and our €6 included an electric hookup. We will definitely remember Thesauque as an overnight stopping point for future years as the car park option is available throughout the winter months. There is a coin operated paybox to raise the entrance barrier and the electric hookup is in the garage! 2 euro coins are also needed to operate the motorhome water and waste point. Reception opens for three hours in the afternoon and we also got to 'meet' two deer who were dozing in a paddock above the crazy golf.


Thesauque's receptionist helpfully recommended us to
Camping Les Violettes which is only about a twenty minute drive away in Deyme. It too has grass pitches, but is much less soggy - perhaps not being right by a lake is the key? We are sharing the site with maybe half a dozen other tourers, all French, and it is considerably more expensive than Nailloux at €19.50 per night. However, for that we do get a whole large pitch instead of just a bay! The shower rooms are excellent and there are all the other usual facilities as well as table tennis and a little shop in the reception. Wifi is €10 for a week, down from €15 as it's low season. It's very green here too which is a relief for the eyes after so much dry Spanish dustiness!

The bus stop outside will get us into Toulouse centre in 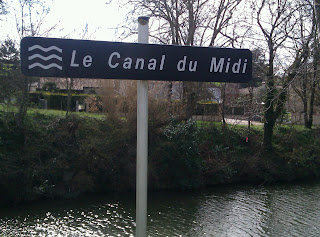 about an hour or we might get the train instead. There's a station nearby and that journey would be twenty minutes. Best of all, we are less than 1km from the Canal Du Midi and after the first 100 metres it is quiet back roads until we get to the canal. Yesterday we walked along the wide cycle path / footpath for about three hours. We thought it was busy because it was a Sunday, but today we jumped on our bikes and cycled for a couple of hours along the canal in the other direction and it was just as busy! We got to a large park and admired lots of houseboats were moored up at the Toulouse outskirts. There wasn't any sign of the temporary shelters we saw on the Canal de Garonne about this time last year. In theory we could cycle into Toulouse for our days out in the city, but we don't fancy walking around all day and then still having over an hour's cycling to get home afterwards!