Cinema trip to celebrate our 18 months in a caravan

Yesterday, the 8th of March, was not just International
Women's Day, but also marked our eighteen month anniversary of caravan living. It certainly doesn't seem six months since I was blogging our one year CaravAnniversary posts. How time flies when you're not paying attention! We had a great sunny cycle ride in the afternoon and then treated ourselves to a film at a little cinema in Cambrils after dinner.

Rambla de l'Art is the cinema and cultural centre for Cambrils and is situated on Rambla Jaume I, just about where it crosses with Carrer Roger De Flor. It is only a twenty minute walk from Camping La Llosa. They show a good range of Spanish films as well as global releases dubbed into Spanish and in original language with Spanish subtitles. For us, the key word to look for is VOSE. This indicates an original language screening so then we just have to make sure that the original language is English! Rambla de l'Art has a light and airy foyer with lots of DVDs for sale and, at the moment, a truly eyecatching display of artworks by Cambrils artist Marta Nolla. I don't know if this is a permanent exhibition and I didn't have a camera with me so have 'borrowed' a couple of images from Nolla's website to give you an idea of her work. Barbara Lennie is a Spanish actress and I loved the Fosse vibe of her portrait. I've also included the Robert Redford and Paul Newman as Butch Cassidy And The Sundance Kid

painting below because it is one of my favourite films.

Last night we were lucky to catch a VOSE screening of 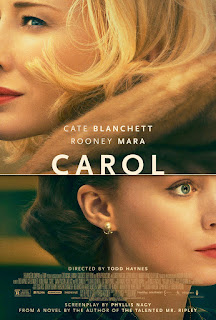 which we had hoped to see weeks ago in Perpignan, but didn't get around to it. I wasn't really sure what to expect and can imagine that Carol is quite a Marmite film (love it or hate it!) It is absolutely beautiful throughout and the 1950s fashions, cars and interior decor are wonderful. The deceptively simple storyline is from a Patricia Highsmith novel

originally entitled The Price Of Salt, and tells of the meeting and romantic attraction of two women. To be honest, not much really happens and there are lots of lingering looks, wistful and moody cinematography, and thoughtful pauses. It's the sort of film where you lose yourself in its artistry and in the subtlety of understated performances. I thought Cate Blanchett was superb as Carol and I also really liked Sarah Paulson as Carol's longtime friend, Abby. I wasn't so blown away by Rooney Mara as Therese, but her naivete was a real contrast to Carol's confidence and worldliness. If you like slow-burning arthouse cinema, I would highly recommend seeing Carol.