I love walking around new-to-me towns and cities. I believe
it is the best way to really get a flavour of my surroundings and I get to see so much more detail than I would zooming past in a car or on the bus. Tarragona is a particularly compact city so perfect for exploring on foot and the narrow stone streets of the Old Town don't even encourage cycling. As we arrived on a Saturday afternoon and most of Tarragona's historic sites and monuments are closed on Sundays and Mondays, we have had lots of time simply wandering which is great. I am enjoying my time here immensely. The Spanish street artists are wonderfully talented and I love discovering all the different styles and subjects.


This mural of a domino playing man is near to the Modern
Art Museum (which we haven't visited yet. It's not open on Mondays.) The mural is signed by Gaser who is a known local street artist. A second, partner mural is just around the corner and depicts another man listening in on his neighbours.

I don't know the artist for the below image of jelly baby style figures climbing up the side of their building, but I love the idea. The figures are painted in such a way as to make the building appear to have three-dimensional steps or terraces. I am not sure if this effect comes across so well in my photograph as it did standing in the street below and gazing upwards. In reality the painted wall is perfectly flat. 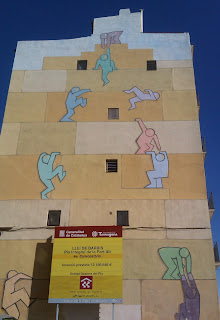 We looked inside the Cathedral yesterday. It is a beautiful
structure, as probably should be expected, and I was surprised at the expanses of pale coloured stonework inside. Small chapels line each side, one of which had these preserved medieval paintings. It must have been amazing to have seen the works when the colours were still new and vivid.

One of the most famous painted facades in Tarragona is this building painted on the end of a building by Carles Arola. I was reminded of the similarly fantastic yellow building that we saw in Lyon. Arola has murals exhibited all over this region and was also responsible for painting the outside of the temporary Municipal Market here while the hundred-year-old Market is renovated.

Two sculptures caught my eye yesterday. The first was this
elongated gold-coloured bronze figure by Lluis M Saumells which is three and a half metres tall and was created in 1976. It is entitled Thales. Saumells has other public sculptures in Tarragona including a tall tree-like piece that I just caught sight of in a Plaza. Having looked through his website, I see there are also sculptures in Cambrils and Salou so I will have to look out for those when we return to Camping Llosa.

The 'building' of castles out of human bodies is a traditional skill around here although we haven't actually spotted it happening yet. There are photographs in all the tourist offices though and we saw this bronze representation yesterday. It looks ridiculously dangerous! The sculpture is entitled Als Castellers. It was created by Francesc Angles in 1999.

We saw more Castellers painted on a bollard today as well.
It was one of a whole street of differently painted posts and I think was the work of a number of artists because the styles changed as we walked along.

There is a section of the Old Town which has a suddenly strong artist vibe. Several of the houses looked like they might actually be artists' studios, however, because it was Monday today, all the doors were closed up so we couldn't see what was going on inside. The doors themselves were interesting though because they are predominantly heavy dark wood which has been intricately carved with natural or geometric designs. Maybe we will get to go back around tomorrow when we explore some of the historical monuments and the artists will be out in force as well.

The last fun mural I saw today was this fun example of children playing. It was created by Marius Arts. 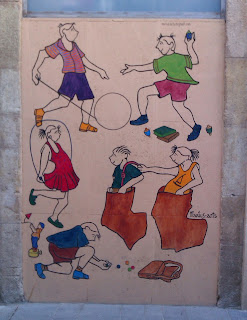