It's the last night of our UK summer tour because tomorrow we take the
long drive back to Sussex and the campsite there in Hailsham from where we started out in April. I've got a bit behind in my blogging over the weekend as I should be writing about today's Weymouth visit, but I haven't yet covered Bristol and Bath, or updated you about some fantastic petition news. We have two and a bit weeks in Hailsham so I will catch up and probably reminisce too. We've had a wonderful summer and I think I would like to write a couple of highlights posts - if I can narrow down enough to not just be recapping everything!

Let's start with the fantastic news! Firstly Shell have announced that they are going to stop drilling in the Arctic for the foreseeable future. How far they can foresee I don't know, but I'm hoping that it's a face-saving phrase meaning forever. Greenpeace's Aurora polar bear can go home! Secondly, PepsiCo - who are the parent company of Doritos - have just come out with a new palm-oil policy containg stronger language around human rights and carbon emissions. Sadly, the policy does not cover PepsiCo’s business partner in Indonesia, Indofood, which produces all of PepsiCo’s products in Southeast Asia, but it's a start and SumOfUs have produced a new video to 'encourage' the company further.

The little village of Moreton is vaguely on the way to Weymouth so we
detoured this morning in order to see their unique church and the last resting place of T E Lawrence - Lawrence of Arabia. I had read a little about this great man in Daughter Of The Desert, the Gertrude Bell biography, so was interested to see his grave, especially as we were so close by. Moreton cemetery is small but has a grand entrance and there is a large stone tablet to the right laid in 1784 in memory of someone's great friend, 'James Frampton'. I wondered if this was the ancestor of the James Frampton who, fifty years later, would order the Tolpuddle Martyrs deportations to Australia. Lawrence's grave is an elegant but unassuming affair and I thought it was interesting that his mother had chosen an epitaph highlighting his scholarly background rather than his military achievements. I have his book Seven Pillars Of Wisdom on my Goodreads TBR list and must remember to look out for a copy.

Also while in Moreton we took the opportunity to walk around the outside
of St Nicholas church which is just a short walk from the cemetery. We saw a gorgeously engraved bowl last week in the Dorset County Museum in Dorchester. Its artist, Laurence Whistler, engraved all the clear glass windows of the church too and, as you can see from the close-up at the top of this post, the detail is superb. The previous windows which I guess were traditional stained glass were badly damaged during a Second World War bombing raid in October 1940. Their 13 hand-etched replacements were created over a thirty year period from 1955 to 1985. Apparently Whistler was commissioned to make twelve windows but actually created thirteen - the thirteenth being a design that featured Judas. The church initially refused this final window so it languished in a museum for several years before finally being installed alongside the others last year. 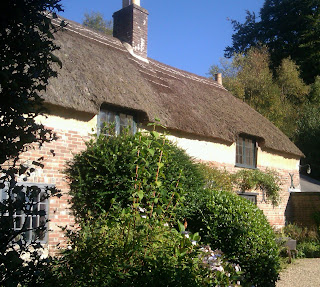 who live here in Dorset. They have two energetic spaniels and we arrived in time for walkies so I got to wander past Hardy's Cottage which is a beautiful National Trust property in Higher Bockhampton. Hardy was born and grew up here, writing several of his early short stories, poetry and novels including 'Under the Greenwood Tree' and 'Far from the Madding Crowd'. The cottage was already closed to visitors for the day so we just peered over the wall! It is a very peaceful wooded spot and would have been even more secluded in Hardy's day making it the perfect retreat for a writer. There is an obelisk memorial outside on the path too which I learned was erected in 1931 by 'a few of his American admirers'. 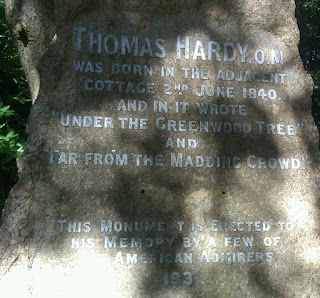