I voted Remain on Thursday - as you might have grasped from this post here - so was bitterly disappointed and worried come Friday morning as I know many others were too. Since then however I have been thinking about how we might just be able to avoid the worst forecast disasters of this Brexit farce and how Leave could work if enough of us really get behind the idea. I remarked on Facebook that maybe if we all enthusiastically support existing campaigns like ShopLocal, BuyBritish and JustACard we could keep our economy from completely bottoming out. I think if we all try to make a small difference - as much as we can - it could be enough and even eventually trigger economic growth. I want to expand on my theory in this post. )I will be saying Britain and British although Scottish devolution and Irish reunification might render these terms obsolete.)

I am seeing so many different ideologies at the moment from disgusting racist and xenophobic violence to calls to work towards beautiful utopia. I am also seeing defeatist comments that it's pointless to try because 'we don't make anything anymore' and the 'politicians need to sort everything out'. Utter rubbish! (Shameless plug alert) Even I make hats! And bookmarks! Hopefully this head in the sand approach is shock apathy talking because if there's one thing we should take away from this Referendum it's that many of our leading politicians couldn't organise a piss-up in a brewery. Whether Britain ends up leaving the EU or there's another Referendum, or Britain disintegrates into individual countries, the processes will take time and we are already seeing extreme financial volability that will harm trade and jobs across Europe and the world. Already prices are rising and while I agree that it is difficult to see how an individual has significant influence, there are 65 million individuals in Britain and we need each only take SmallSteps. 65 million small steps is a long journey. Let's look at three small steps I plan to take.

When shopping at Morrison's a few days ago, there was only one variety of British-grown apple stocked amongst several from Chile and elsewhere, and ours were a few pence more expensive. I can't remember exactly, but maybe 30p more for a bag of five - an affordable difference. Now, nothing against the Chileans, great people and I like their literature, but I bought the British grown fruit. Obviously I realise that one bag and 30p won't actually make a blind bit of difference. But remember the 65 million? Just imagine the effect if we all coughed up 30p extra and bought British apples? We'd run out of apples! This is the big idea behind the JustACard campaign. Many people making small purchases have a huge impact in preserving businesses. Don't be embarrassed about only spending a small amount somewhere. Something is always better than nothing!
In Britain we still grow a lot of produce and raise food animals. We have those aforementioned breweries, plus cheesemakers, fishing fleets, market gardeners, beekeepers, ... I am not advocating a complete boycott of non-British produce, but I am going to retrain my brain away from always choosing the cheapest to choosing the most local.

I am going to make a point to CheckTheLabel and BuyBritish whenever that is an option.

Of course, shopping at a large chain like Morrison's, while convenient, doesn't help my local town economy much. While travelling around the UK last summer we noticed the most vibrant towns were those where people still used their High Streets, visited their weekly markets and had a genuine sense of community. In France towns even have some of their markets in the evenings so people can visit after work. It's like a little weekly street party! I like independent shops and cafes anyway, so making more of an effort to ShopLocal and use them won't be too arduous. Vibrant towns are attractive to investment so supporting mine will help it to create jobs, thereby encouraging new shops and businesses to set up in a self-propelling chain reaction.
This Totally Locally poster illustrates the community benefits well: 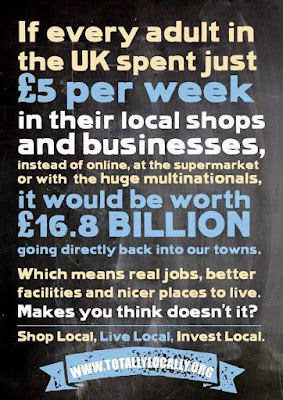 Plus small businesses are less likely to have shareholders swallowing up chunks of their profits and are more likely to pay their full share of taxes. And those businesses are owned and staffed by local people too so it's in their interest to spend locally what you pay to them. Large chains siphon off a high proportion of their income to head office locations which might not even be in Britain. Obviously some large purchases like cars, furniture and household appliances might be difficult to find on the High Street as so many shops have been forced out of business over recent decades, but the internet is a great resource for locating what I need. Britain has a strong artisan and craftsperson manufacturing sector. Prices do seem higher, but the crashing pound is likely to erode the apparent cheapness of many foreign made products and, especially for gift giving, why buy mass produced plastic crap from the other side of the world when surely a unique locally made and chosen item is far more meaningful?

£350 million a week for the NHS was a much publicised and now discredited VoteLeave campaign statement. I wondered how much of that we could actually save anyway by just making small lifestyle changes. Healthier people need fewer health services and, while I don't consider myself a drain on the NHS right now, who knows what I might be setting myself up for in the future?
With the loss of EU membership will also come the loss of EU legislation on environmental aspects such as air pollution levels and green space conservation. It would be nice to think the Tory government would keep these laws, but I don't hold out much hope! Greenpeace are already gearing up for the fight, but there is a lot we can do as individuals too. Air pollution is one of the major killers in the UK and a lot of the problem is caused by congested traffic in our towns and cities.
I actually use our car less with our caravan lifestyle than I did living in a house, by several thousand miles a year, but I could reduce it still further by walking or cycling every short journey. The exercise will benefit me and the reduced diesel emissions will benefit everyone. Petrol and diesel prices will no doubt shoot up as a result of the crashing pound so saving money by not driving makes sense too and the more of us who use and insist on safe footpaths and cycle lanes, the more that will be marked out and built. That's more jobs being created too. Walking into town ties back in with ShopLocal as well. I am more likely to get a good sense of what businesses actually operate in my town by walking past them. I notice far more on foot than I ever do through a car window.

I am going to make a point to eat more healthily and walk or cycle journeys of a mile or less.

So, those are my three SmallSteps lifestyle changes which I hope will benefit me as well as whatever is left of my country. I am looking forward to the challenge and would love to discover other such practical suggestions too. Please do Comment your ideas! As a national community, I know we have a huge struggle ahead and the current lack of decisive leadership really isn't helping anyone. Whether Brexit becomes reality or whether Hugh Laurie's suggestion of 'Best of three?' is the route chosen, I think my SmallSteps, if undertaken by enough of us, will result in a revitalised country able to maintain a useful role in Europe and the world.
Posted by Stephanie Jane at 10:52