Our visit to Tortosa

Yesterday we jumped in the car and drove ourselves 45 minutes into Tortosa, a historic town a little inland from the Ebro delta. In Roman times it was known as Dertosa, although the town predates Roman occupation. It was also ruled by the Moors for over 400 years and this Arabic legacy is seen in some of the remaining architecture and in traditional foods of the town. Sadly many buildings were destroyed during various wars over the centuries so there is now a mix of the old jutting up against the very new throughout most of the centre. We had hoped to follow the Hemingway Route through Tortosa as Ernest Hemingway lived here in 1937 and 1938 reporting on the Civil War. Ten points of interest are named and we visited the Tourist Information Centre, a beautiful building, to get a map of the Route so we could explore. Unfortunately 'no tengo nada' (I have nothing) said the staff! Apparently we needed to have downloaded and printed out what we wanted - maps of the town, the Hemingway Route and the Via Verda cycle path - from the internet prior to our visit. Unlike the very helpful Ametlla de Mar Tourist Office, Tortosa's one was useless!

So, instead of literary inspiration leading us, we wandered more aimlessly, but still managed to find El Portal del Romeu which is the old Roman gateway, now a stone arch under and between more modern buildings. We also circled the 14th to 18th century cathedral, as impressive a structure as could be expected, but surprisingly short-looking from its river frontage because it doesn't have a great tower or spire reaching to the sky. Out in the river nearby is the Battle of Ebro monolith, this being almost entirely a spire, which was inaugurated by Franco in 1966 to honour those of his forces who died in Civil War battles across the Ebro. I found this interesting Progressive Spain article talks about how the monument is now technically illegal as it breaches Spain's 2007 Historical Memory Law that serks to remove or recontextualise symbols glorifying the Franco victory. Tortosans voted last year to decide the monument's fate and decided to rededicate it to honour everyone who died. 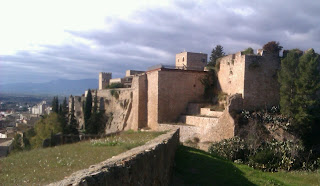 Away from the riverside, we ascended towards the huge stone Castell on the hill and were surprised to find a fairly large area of derelict looking buildings and streets. They didn't look lived in, other than by stray cats, as pictured above. Above this, we climbed up steps to fortified walls where we had great views out across the town, towards the delta and further up the narrowing river valley. The Castell was originally a Roman fortification, but was rebuilt by the Moors so much of what towers over the town today is based on the Arabic construction.

We ended our wander with a delicious Menu Diario lunch at an olde worlde looking restaurant next to the cathedral. Forn de la Canonja serves a three course lunch with bread, wine, water and coffee for just €12 per person and we had excellent food. I tried a couple of regional dishes, peas and artichokes as a starter and borage fritter for dessert, with a lightly cooked bacalao main course. Dave had pumpkin soup to start, grilled meats (cooked over a wood fire) for main and a nougat cheesecake for dessert. Together with efficient friendly service, we'd highly recommend Forn de a Canonja to anyone visiting Tortosa! 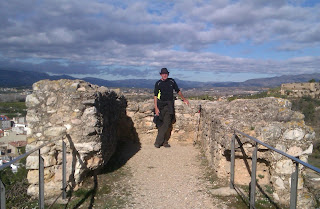