The first of a pair of tenuously linked posts today! I want to 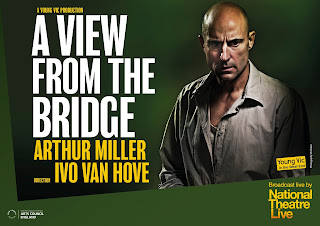 talk about the superb National Theatre live production we saw at Dartington Hall's Barn Cinema on Thursday evening and our Dartmoor woodlands walk on Friday afternoon both of which incorporate views from bridges.

A View From The Bridge, the Arthur Miller play, was reimagined by Dutch director Ivo Van Hove for a Young Vic revival last year. I think we must have been travelling too far from a venue when NTlive first screened their broadcast so I was delighted to be within reach of several venues for Thursday evening's encore. We chose to patronise Dartington Hall's Barn Cinema which is beautiful. Finding it was a little tricky as we seemed to be driving through the Estate for a very long time, but once there there is plenty of car parking for just £1. The Barn is just that and I loved the thick wooden beams and whitewashed stone walls. Comfortable-enough tiered seating is thoughtfully offset so all seats have a clear view and, although the screen is smaller than we expected so we thought we might be too far back, this turned out not to be the case.

Ivo Van Hove chose to stage his almost propless production in a stark boxing ring style set. This meant we could focus entirely on the dialogue without distraction. The narrator-lawyer-referee Alfieri (Michael Gould) provides a bridge between the audience and the characters as we watch longshoreman Eddie Carbone's (Mark Strong) domestic life crash around him. Eddie and his wife Beatrice (Nicola Walker) agree to host two illegal Italian immigrants, Beatrice's cousins, in their home and one, Rudolfo (Luke Norris) begins a relationship with Eddie's sheltered niece, Catherine (Phoebe Fox). It's a very powerful story of jealousy and rivalry which is still incredibly relevant despite having been first staged some sixty years ago. I left feeling distinctly steamrollered by the emotional impact of the play. All the actors are perfect throughout especially Mark Strong and Nicola Walker. I liked the understated accents and was impressed with the pacing especially in a scene which resembled a communal meal - tough to know without props! - where the stilted conversation created unbearable tension.

Having not seen any other versions of A View From The Bridge, I can't compare this one, but I just feel so lucky to be able to experience theatre of this sublime quality from a tiny cinema in Devon. Dave and I have been talking about A View From The Bridge on and off since it finished two days ago and I believe this is the most discussed NTlive play we have seen. NTlive and similar broadcasting ventures are a fantastic innovation which I hope continue for years to come as we certainly wouldn't get to see such memorable productions without them!
Posted by Stephanie Jane at 10:30