The weather has turned distinctly autumnal since New
Year here in the south-western corner of France. Our first significant rain since we arrived at St Jean Pla de Corts began to fall just as we were picnicking on the harbour front at Collioure! Our last visit to this beautiful town, popular with artists, was some ten years ago when our holidays had very different priorities mainly because we both still smoked and Didn't Walk. A decade later and we surprised ourselves with what we had missed first time around.

We began our walk from the hamlet of Le Racou which is
about four kilometres from Collioure. It's a pretty and interesting place in its own right with several quirky bars and cafes, lots of sand and little stone houses built out right out onto the beach so the 'roads' between them are actually just the sand. The word 'racou' means nook in Catalan and the hamlet is tucked into a small corner of the bay. Originally a tiny fishing community living in wooden shacks, the first stone houses were constructed in the 1930s with development really taking off after the Second World War. Le Racou declared its independence in the 1960s and, although no one else really took them seriously, this did result in specifically local oddities such as Catalan street names. I guess Le Racou must be incredibly popular in the summer months judging by the size of the car park and dozens of bike stands. However visiting in early January meant the streets were almost deserted. The Sentier du Littoral was busier than any of our other walks in this area, but we still had the coast to ourselves a lot of the time!

There are two coastal routes from Le Racou to Collioure, 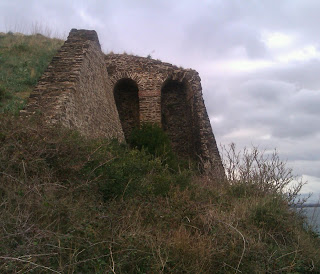 one intended for walkers and the other for cyclists. We actually ended up doing both - the walking route out and the cycle route back - because I didn't fancy a couple of the rocky walking descents after the rain. It would probably have been fine. These are a number of interesting sights en route including isolated houses, wartime remains such as gun emplacements, and large fortress-like buildings. We weren't sure exactly what the pictured brickwork was supporting as we couldn't see above the cliff edge from the footpath. We passed our campsite from all those years ago, Camping Les Amandiers, and had no problem with walking the steep down and uphill into Collioure town. Previously we had driven as close as we could get and really struggled to get back to our car. (We were so much older then, we're younger than that now!)

My main image memory of Collioure was the view through
an empty picture frame on the harbour front as shown in my first photograph. It turns out that there are several of these frames dotted about, each positioned to allow viewing of Collioure as seen by a particular artist. Details of the painting are etched into the frame. It's a great idea for a cheap tourist route and made a change from the painting reproduction plaques we have seen elsewhere. Presumably no royalty payments are involved either! Original artwork has been commissioned for public spaces too and I particularly liked this sculpture by Francesca Caruana. It must be amazing on sunny days with the light spearing through the circles.

Sheltering under a conveniently empty marquee, we decided to head back to Le Racou rather than wander around Collioure first. I did see a good mix of independent arty and touristy shops as we passed as well as lots of restaurants. Despite the greyness, Collioure was busy with practically everywhere open for business. This was a contrast to Le Racou where most businesses, other than a couple of the cafes, were closed.