Making a few changes to our Bailey Orion caravan 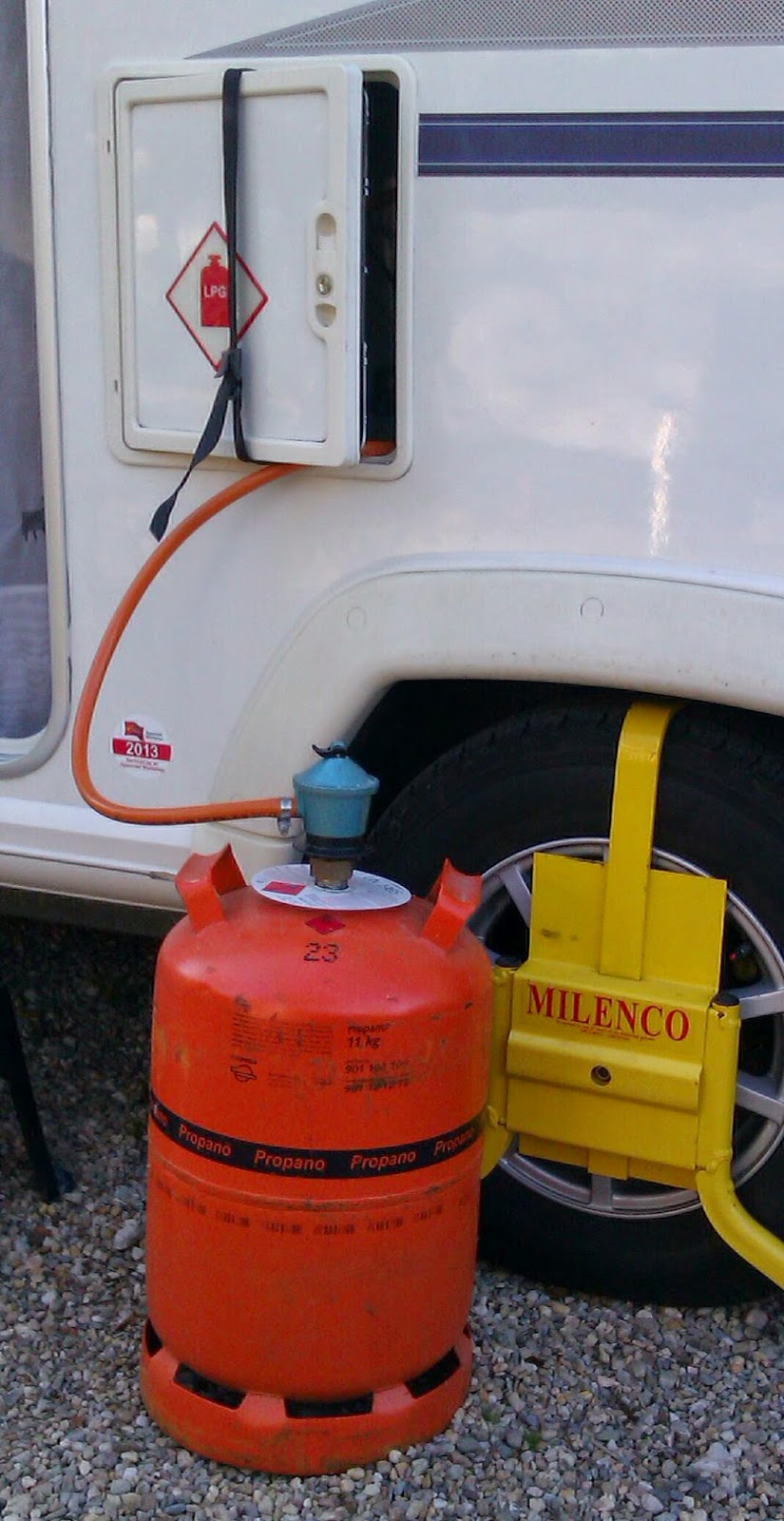 that's seen us both feeling pretty tired today. We ended up way off where we thought a route should be so had to do some energetic uphill and scary downhill scrambles. Both of us now have scratches on our legs from dry scritchy plants and brambles - Dave's array is particularly impressive. I thought about trying to create another Google map but we're not totally sure where we went and I don't think I would want other people following those particular footsteps. So instead I'm going to blog a out the little improvements we have made to Bailey recently.

There's a brand new addition to the outside of our caravan this week - as you can see in the photo. Having lugged the empty Repsol bottle that we bought at Sopalmo campsite last year all the way down through France and Spain, this week we got ourselves to a Repsol petrol station and exchanged it for a full one! There is only one place local to Mojacar which sells the propane gas cylinders and that is out on the road from La Garrucha to Vera. We could only get butane easily at the other petrol stations in the vicinity, but should have got the propane further north. Apparently propane is better in low temperatures and the whole point of travelling this far south is because it is warmer! Dave had already researched how to connect the Spanish cylinder to the British pipes and had purchased the right adapter before we left home. The installation wasn't completely hassle free but far easier than replacing the water pump! Our new gas is now connected up and working and ridiculously cheap compared to British prices. 11kg of Repsol propano was €15.40. 3.9kg of Calor propane is £15.99 on their website and we think we remember paying more in Eastbourne!

Our other recent changes are purely cosmetic. I can't remember if I mentioned our jettisoning of the carpets before we left Camping Florantilles? They had always looked a bit grubby because they had been left in their plastic coating from new for far too long. This meant the glue on the coating had come off on the carpets leaving them covered with tiny sticky bobbles. I spent a couple of afternoons cleaning them with daubs white spirit which helped a lot. However, we finally got fed up and decided the bare wood floors looked so much better! And they do so to hell with the resale value! We bought this rug on Wednesday from Souvenirs Maria Rosa in Mojacar. This is my first photo taken with my Kindle Fire so please excuse the quality. It looks better tiny! 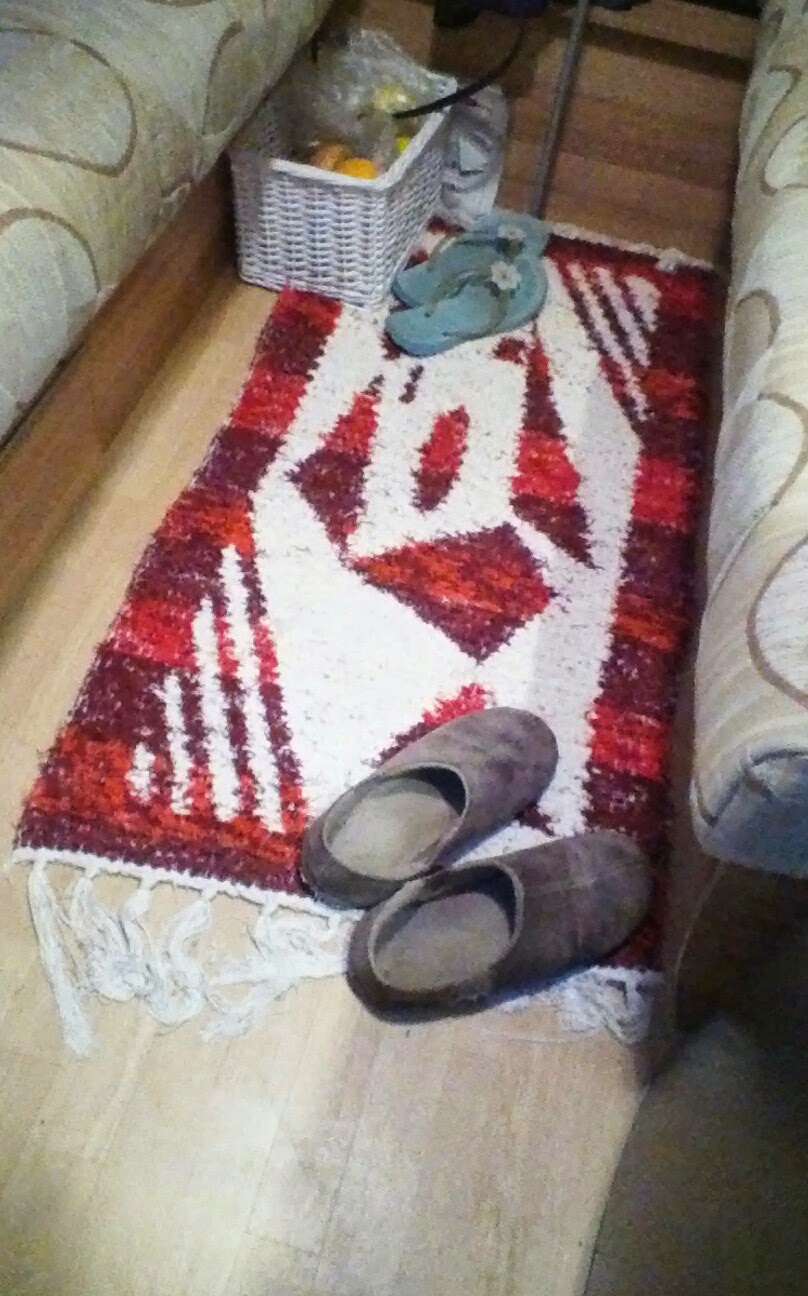 I also spotted this beautiful wrap at Kasbah on Mojacar playa. It is made of aloe fibres and is currently doing duty covering the back of my bench seat. 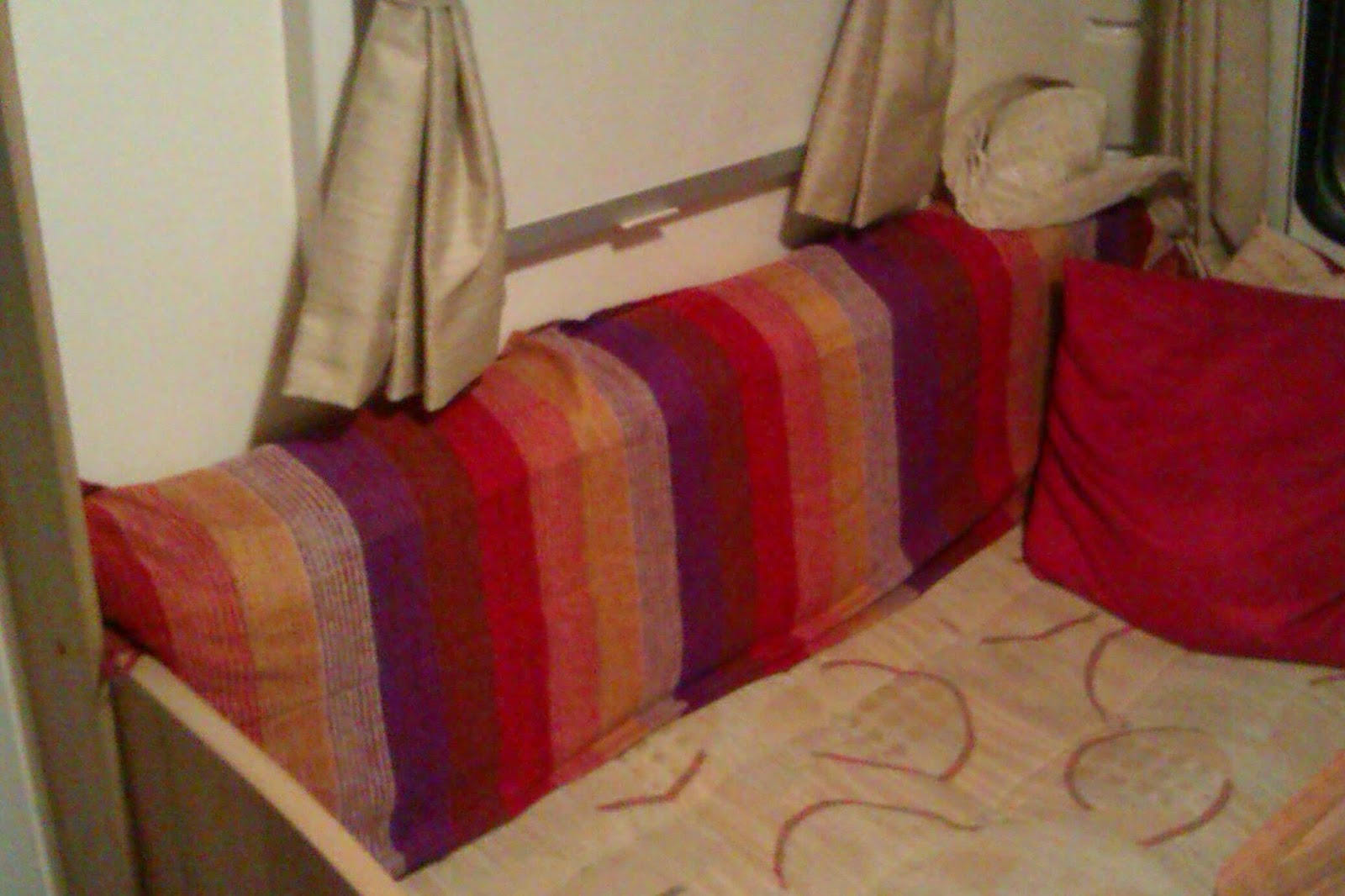 Our final 'upgrade', which doesn't really warrant a photo, is a new chopping board. The Bailey Orion came with a large white plastic circular one which also doubled up as a cover for the sink. Unfortunately its designed home, with the table top in a vertical space between the fridge and tbe oven, meant it was exposed to considerable heat when the oven was in use. So it warped and would no longer fit securely on top of the sink. It scored very easily when chopped upon too, and was far too large to conveniently fit in the washing up bowl. All told, a nuisance all round! It has gone binwards today to be replaced with a €2 Bright Orange rectangular one.

As regards further alterations, we are thinking around the idea of not needing the mains hookup everywhere we go. This might save money and will allow us greater freedom when choosing campsites, especially those CL sites in the UK which have no electricity. Our friends, Chris and Marta, might be getting a solar solution soon so we will interested to learn how that works out for them. Personally, I am intrigued by pedal power generators. We saw one at the Alternative Living festival in Socoa, France. I found this LowImpact.org website which explains the principles, but my brain has given out by the time I get to the technicals. I like the idea of using Dave's bike effectively as my exercise bike and contributing to the caravan's energy store at the same time.