I am not a number! ~ visiting Portmeirion in North Wales 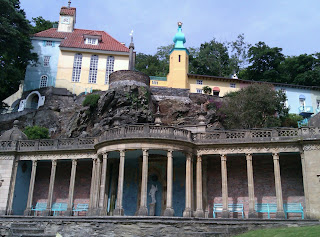 Did you ever watch cult 1960s TV series The Prisoner? I (obviously) didn't see it first time around, but caught a rerun probably in the late 1980s and got hooked. I loved the colours and the surreal imagery and, even though I still have absolutely no idea what was really going on (does anyone?!) The Prisoner was about my favourite programme before Twin Peaks came along. Its real location, the Welsh village of Portmeirion, has been on my travel bucket list for decades and last week I finally found myself there. At last! Fortunately I didn't get gassed and wake up there - we drove instead - so leaving at the end of the day wasn't a problem!

Portmeirion was designed and created by architect Clough Williams-Ellis to show how a beautiful site could be developed without spoiling it. An ongoing project which he led for some fifty years from the 1920s to the 1970s, Portmeirion is now owned by a registered charity. The site was inspired by Mediterranean villages, particularly Italian ones, and contains a bewildering array of Grade I and Grade II listed historical buildings in wildly differing architectural styles. They are painted in sunny colours and the whole place looked stunning for our visit. 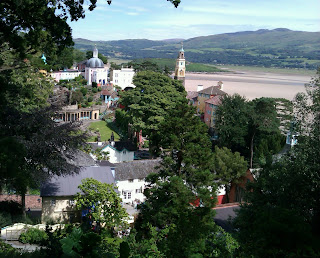 We were lucky to get our tickets bought just as one of the half-hourly guided tours was beginning so quickly caught up. Our guide drew our attention to artworks painted onto walls by one of the Williams-Ellis daughters and to odd artefacts such as the gold painted Buddha statue which I believe I remember had been a film prop. We passed cafes, the Portmeirion pottery shop and a The Prisoner shop too. The tour took about twenty minutes and we were then right on time to board the train and be driven around the Woodland Walk. A stop on this route allowed us views across Portmeirion village and its estuary. Disappointingly, there weren't any giant white balloons guarding the sands!

After the train we explored part of the village before heading down to the waterside where we decided to attempt the Coastal Walk without the aid of a 'dotto train'. Dave was suffering from the aftermath of a bad cold so was particularly breathless so we hoped this walk would be flatter than the forest one. It mostly was - until the two routes merged! We sat on a porticoed terrace and climbed up to a lighthouse viewpoint before ambling back past ponds and a red Japanese bridge where Dave made friends with a surprisingly tame robin. 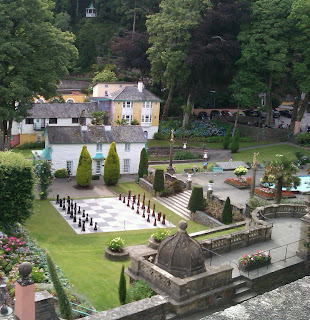 Back in Portmeirion itself I took the opportunity to talk to artist in residence Briony Clarke who has her studio overlooking the lawns. Initially on a six month residency, Briony ended up staying for four years and has created a fascinating painting technique combining locally gathered pigments with moving water. She has developed a trio of machines, one of which - a spiral of water going down a drain - produces spookily beautiful monochrome landscapes that could almost be the water painting where it has come from. I know that sounds weird, but the work is amazing! Unfortunately I forgot to take any photos.

I am so glad that I finally got to visit this incredible village and I certainly wouldn't rule out returning at some point in the future. As well as day tickets there is also self-catering accommodation and a hotel at Portmeirion so perhaps we could treat ourselves for a future anniversary? 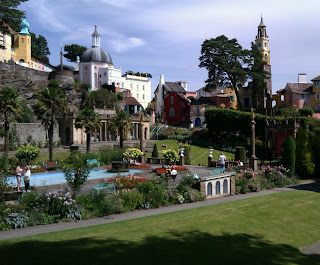 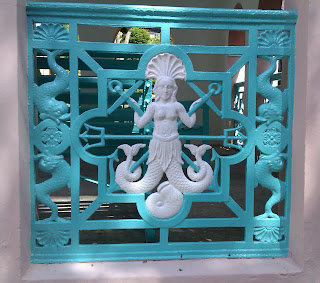