We're in a British bubble at Champagnac La Riviere

Our last-but-one campsite before we return to the UK is
Camping Parc Verger in the pretty Limousin village of Champagnac La Riviere. We chose to come here because of its proximity to the new home of our friends Chris and Marta (whom you've met in previous posts). They are about an hour's walk away from our campsite and I am hoping to write about their fantastic French adventure in a future post. In the meantime, Camping Parc Verger is kind of perfect for us right now not only due to that location, but also because of its Britishness which is swiftly acclimatising us to what we will face in a week's time. Once past the barrier, it's hard to tell we are still in France - this could be a Caravan Club site anywhere in the UK. It does feel a bit odd hearing so many English voices all the time. 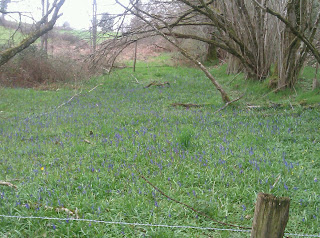 Now run by Franc and Lisa, who took over last year, Camping Parc Verger has been British-owned for years. We have a pleasant view towards a neighbouring lake from our pitch and everywhere around here is a wonderfully lush green. We have seen jays, wagtails and hoopoes on site, and cowsips, daffodils and bluebells in meadows and woodland nearby. The site is just out of the village centre and within a hundred metres of a Voie Verte cycleway that runs from Oradour sur Vayres to Chalus. We have already cycled the four kilometres to the Oradour end as part of a circular route - it's worth noting that while the Voie Verte may be fairly flat, the surrounding roads are most definitely not! They are mostly quiet though and cars are great at giving cyclists a wide berth, but we got very puffed out very quickly.

Back on the campsite, everyone here at the moment is
either English or Scottish and apparently this is the case most of the time - Parc Verger is open all year - other than in high season when Dutch, Germans, Belgians and French also book in. We are paying €18 a night (Discounts are available for stays over 14 nights) for a hardstanding pitch with 16A electricity which seems luxurious after the mostly 6A campsites elsewhere. In theory we can have the heating and the kettle on at the same time! We've not tried yet though, because we don't want to be the ones to blow the trip switch! The shower block is small but excellent with lots of hot water in the generously sized shower cubicles. There is a disabled-access wetroom too that anyone can use if no disabled people are onsite. Dave tried it out and was actually impressed - so it must be good! The little cabin Reception has essential groceries for sale, and books for exchange. Plus the wifi has a good signal sitewide and is free. The only thing missing is a laundry sink, although there is a washing machine and tumble dryer, but I managed just fine with our red bucket atop the stone work surface by the dishwashing sinks - there's hot water here too.

On the downside, it certainly is cold this far north and we managed to get ourselves rained on yesterday. You can see the thick clouds in my photograph and it's pretty much the same today too. We have been here since Tuesday and have only sat outside in the sun once. Oh well, I suppose we need to be getting used to that too!