If this is your first visit to my WorldReads blog series, the idea of the posts is to encourage and promote the reading of global literature. On the 5th of each month I highlight five books I have read from a particular country and you can see links to previous countries' posts at the end of this post.

Click the book titles or cover images to visit their Literary Flits book review pages. Or click on bookshop names to visit their websites and buy a copy. Bookshop links are affiliate links so I would earn a small commission from your purchase.

This month's country is Scotland! I took part in Peggy's Read Scotland Challenge over at Goodreads for a couple of years so had quite a choice of Scottish-authored books from which to choose for this post. I hope you will find one to tempt you amongst the five, plus I'm reviewing my latest Scottish read, The Things We Learn When We're Dead by Charlie Laidlaw, over on Literary Flits today (from noon).

The German Messenger by David Malcolm


Late 1916. Europe is tearing itself apart in the Great War. Harry Draffen, part Greek, part Scottish, British secret agent, cosmopolitan, polyglot, man of violence, is having a bad war. Now he is instructed to uncover a plot by the Central Powers against England. From the slums of East London to an Oxford college, from the trenches on the Western Front to an isolated house on the Scottish coast, on to a bloody showdown in the North of England, he chases a phantom and elusive German messenger.

Donny (Jared Harris) has awoken in hospital after a car crash. His head injury resulted in brain damage leaving him with no memory of the past three years. As far as he is concerned this time might as well have not happened. He doesn't recognise his wife of two years, Trish (Siobhan Hewlett) and believes he is still happy in his previous relationship with Emma (Sophie Winkleman), and stepfather to her daughter Fiona (Moira Quirk). Neurologist Al (Paul Fox) is using Donny's situation for research and persuades Emma to visit the hospital.

The Luminous Life Of Lilly Aphrodite by Beatrice Colin


As the clock chimed the turn of the twentieth century, Lilly Nelly Aphrodite took her first breath. Born to a cabaret dancer and soon orphaned in a scandalous double murder, Lilly finds refuge at a Catholic orphanage, coming under the wing of the, at times, severe Sister August, the first in a string of lost loves.
Gripping and darkly seductive, The Luminous Life of Lilly Aphrodite showcases all the glitter and splendour of the brief heyday of the Weimar Republic, and the rise of Hollywood to its golden age. As it foreshadows the horrors of the Second World War, the novel asks what price is paid when identity becomes unfixed and the social order is upended.

Goblin by Ever Dundas


A novel set between the past and present with magical realist elements. Goblin is an outcast girl growing up in London during World War 2. Having been rejected by her mother, she leads a feral life with a gang of young children amidst the craters of London's Blitz. After witnessing a shocking event she increasingly takes refuge in a self-constructed but magical imaginary world.
In 2011, a chance meeting and an unwanted phone call compels an elderly Goblin to return to London amidst the riots and face the ghosts of her past. Will she discover the truth buried deep in her fractured memory or retreat to the safety of near madness?

The Glasshouse by Allan Campbell McLean


Austria, 1945. World War II is drawing to a close, but RAF signals clerk David Fraser is only just beginning a 112 day sentence at the infamous Glasshouse military prison. The name alone is enough to have the bravest of soldiers quaking in their boots. For the prisoners, their stay is an unimaginable nightmare of physical and mental torture. For the guards, it provides an unrivalled outlet for their own anger and frustration.


That's it for December's WorldReads from Scotland. I hope I have tempted you to try reading a book from this country and if you want more suggestions, click through to see all my Literary Flits reviews of Scottish-authored books! Please do Comment your own favourite Scottish books below and if you fancy buying any of the five I have suggested, clicking through the links from this blog to do so would mean I earn a small commission payment.


You can join in my WorldReads Challenge at any time! Simply read 1 or more books from a different country each month, write a post about it/them, grab the button below and add it to your post. Don't forget to pop back here and Comment your link so I can visit! 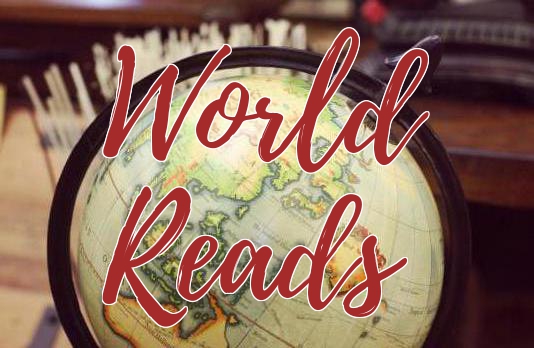 In January I will be highlighting five books by Iranian authors. See you on the 5th to find out which ones!
Posted by Stephanie Jane at 08:27