Animals Are Not Freight - Global Day Of Action @ciwf

Twenty years ago, 67,488 sheep burned or drowned as the ship carrying them burst into flames in the Indian Ocean and sank. No one came to their rescue. And since then millions more animals have endured appalling suffering during transportation – through stress, heat, injury, dehydration and illness. This has to stop.

August 29th 2016 marks the 20th anniversary of this - the world’s worst ever live export disaster. Today campaigners from at least 23 countries will be taking action against long distance animal transport. At the harbour in Sydney, a rally will be taking place; in Tel Aviv, there will be a march; and Compassion In World Farming will be in central London to transmit this important message to the world: Animals Are Not Freight. I am marking the occasion with linked posts on both my blogs, here and at Literary Flits. 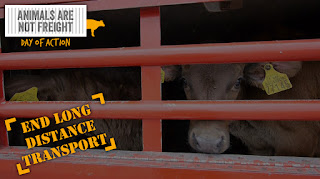 Compassion In World Farming have set up a special website - http://notfreight.org - highlighting all the events happening online and offline to mark this day and explaining more about why long distance animal transport is so bad.

Animals are crammed into vehicles. Overcrowding will mean that some cannot lie down at all, while those who do may be injured or trampled to death. Others endure long journeys with legs trapped and injured, or painfully stooping as they are not given sufficient headroom.

Animals are sentient beings and feel pain and stress just like we do. Animals are transported in both blistering heat and freezing conditions. Trucks may be faulty, and cause limbs to be trapped or animals to stoop for days on end. Some will be injured as those around them panic. Water may not be provided throughout these long journeys. Animals’ immune systems are often reduced as a result of the hardship of long distance transport, resulting in diseases being caught more easily.

Animals are not freight. There is absolutely no excuse for treating them in such a cruel way. 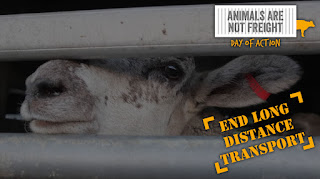