#SmallSteps week 2 & why not to Pay At Pump 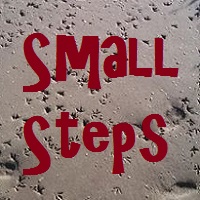 I am blogging a series of Monday posts about ideas I think might help our disUnited Kingdom communities to get through the post-Brexit turmoil ahead. If you haven't already, you can read the first post here. SmallSteps lifestyle changes, if embraced by enough of us, could help to keep at least our towns and communities afloat through the months ahead.

I've decided to keep a track of my attempts to practice what I preach! My initial three SmallSteps are:

So how did I do this week?
We were pitched up just outside Hailsham until Thursday, then moved to North Warnborough to attend a wedding at the weekend - Congratulations to Liv and Aidan! We walked into Hailsham to pick up a prescription then spent £4.90 on 'fruit treats' at Truffles Bakery (ok, Eccles Cakes! They were very good!).
I bought British strawberries with our weekly shop as well as British milk and free range chicken, Borderfields rapeseed oil, Yeo Valley creme fraiche and Jacob's Cream Crackers.
Then, once in North Warnborough for the weekend (full blog to come tomorrow), I walked from our Caravan Club CL campsite to the nearby Newlyns Farm Shop which is a dangerously tempting place! I only wanted apples, but came out with a bagful of delicious British goodies including Wooden Spoon jam, a Good Taste Bakery Lardy cake and a Compost Heap greeting card.

For my SmallSteps this week, I walked all journeys less than two miles and spent £19.75 in local shops. My healthy eating took a hit though as I ate too much cake, especially enjoying the gorgeous birdcage wedding cake confection.


Why not to Pay At Pump
Sitting in a Morrison's petrol station last week, I remembered something my friend Margaret said a year or so ago about how she doesn't use self-service checkouts because she would rather keep people in jobs. At that time, I did tend to use them, but, since that conversation, have mostly tried not to. There is a lot of uncertainty at the moment with some experts talking about large companies preparing to leave Britain, George Osborne talking about slashed business taxes to persuade them to stay, and no one really knowing what will happen until that Brexit decision is finally taken. Vote Leave laid the blame for lost employment firmly on immigration, but it's far more complicated than such a simplistic statement. Increased automation is one factor that is slowly eroding jobs across this country and ordinary people like me and you are being encouraged to assist in this self-defeating operation. Why are we actively doing ourselves and our neighbours out of jobs?

Do you remember the famous J M Barrie quote from Peter Pan, "every time a child says, 'I don't believe in fairies,' there is a fairy somewhere that falls down dead."? Well, that's kind of how I feel about self-service checkouts and Pay At Pump. Every time we use them, that's another job vanished from our economy! Personally, I would rather donate a minute or two of my time a week in a queue to help keep people in jobs. This modern idea that we all have to live at a frantic pace, dashing though every minute is, I think, not only unhealthy but antisocial too. We are becoming more alienated from our neighbours and communities and I don't see that anyone is really the happier for it.

So for my fourth SmallSteps I am going to make a conscious decision to stop using self service checkouts and Pay At Pump petrol stations. After all, if supermarkets see that their customers aren't using self-service options, they will revert back to real checkout and petrol kiosk staff. And I might well be happy for one of those jobs soon!


My ShopLocal business shoutout this week is for the K Cafe in Guildford which got a glowing review from Rosie on her Cider With Rosie blog. The cafe describe themselves as "created to provide delicious fresh food in an independent environment in the centre of Guildford," K Cafe entices "customers with perfect coffee, wholesome and nutritious salads, homemade juices and tempting treats. Everything is either handmade by Kalm Kitchen or by carefully selected suppliers, who share a passion for all things artisan." Sounds fantastic!
Posted by Stephanie Jane at 09:30