The Faraday Cage ed. by Steve Turnbull / Quirkology by Richard Wiseman / On The Road by Jack Kerouac

The Faraday Cage by Steve Turnbull
My rating: 4 of 5 stars

I received a copy of The Faraday Cage from its editor, Steve Turnbull, in exchange for my honest review. It's official launch is today! (14th May 2016)

The Faraday Cage is a collection of five short stories all set in Turnbull's Voidships steampunk universe and each written by a different author. I believe Turnbull originally envisaged his creation as a place for collaborative writing, but I think The Faraday Cage is the first publication with multiple authors. I am already familiar with the setting having read Turnbull's first two Maliha Anderson mysteries, Murder Out Of The Blue and Blood Sky At Night, however previous knowledge isn't needed in order to understand and enjoy The Faraday Cage so starting with this collection would be just as good an introduction to the Voidships world.

The five stories are The Haemophage by Robert Harkness, Taking The Cure by Peter A Smalley, The Iron Curtain by Virginia Marybury, Dear Prudence Katy O'Dowd with Steve Turnbull, and The Computationer by Steve Turnbull. I loved that they cover such a wide range of situations and locations, each interestingly described and well-evoked within short story limitations. Harkness's mining voidship in outer space is a claustrophobic and intimidating murder mystery whereas The Iron Curtain shows us extravagant luxury in pre-Revolutionary Russia. Taking The Cure flies us to the moon and back - well, hopefully we will get back! - then romance Dear Prudence pits a newspaper agony aunt against the family of her beloved, a wealthy heir met by pure chance, before we see then-small town Perth, Australia through the eyes of The Computationer. This is a well-balanced collection which I think has something rewarding to offer most readers. The stories are nicely observed, atmospheric and entertaining and I appreciated the title page illustrations, drawn by Maria Oglesby, which beautifully set the scene for each tale.

Quirkology by Richard Wiseman
My rating: 3 of 5 stars

I registered this book at Bookcrossing

I picked up a copy of Quirkology on a French campsite book exchange having previously enjoyed reading Richard Wiseman's self-help book 59 Seconds. Quirkology is a much thicker tome(!) which sets out to explore the findings of many different and unusual psychology studies undertaken over the past century or so and explain their results in layman's terms. I was disappointed by quite how low the bar is set, having hoped for a deeper view of the work with more science and less joky padding, but there are lots of nuggets of interesting information dotted throughout the book. Eccentric Victorian scientist Francis Galton gets several mentions which reminded me of the interesting biography of him I read a couple of years ago: Extreme Measures by Martin Brookes and, in a small world moment, recently read science author Simon Singh crops up too having been involved with making a Tomorrow's World feature where the great British public were asked to determine whether Sir Robin Day was lying. Sir Robin? Surely not!

Although some huge studies are described, I was surprised several times by apparently significant findings being decided from very small samples and I didn't agree with all the results either. Apparently women find jokes funnier than men do because in social situations we laugh at over 70% of jokes told by men, whereas men laugh at less than 40% of jokes told by women. Hmmm. Nothing to do with women traditionally being 'trained' to bolster male egos then? Perhaps the fake smile identification study should have been carried out in tandem? Overall Quirkology kept my attention for a few hours and it is a humorous, light read, but not really sciencey enough for my tastes. 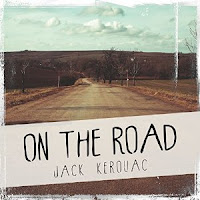 On the Road by Jack Kerouac
My rating: 4 of 5 stars

I listened On The Road in August 2013, but wasn't blogging my mini book reviews back then. I re-discovered a few recently so am adding them into my book review trios.

It took me a while to get into On The Road. I had the audiobook version read by Matt Dillon who did a great job and, I thought, had the perfect voice for Kerouac's writing style. I found the characters all basically unlikeable to begin with and it wasn't until around the middle of the story that this started to change and I began to understand and empathise with their journey and motivations. Even then, it was the wildly dysfunctional Dean that I thought was most sympathetic and I never really pinned down Sal. The descriptions of America and Mexico throughout are detailed and, purely as a portrait of a time and place, this is a fascinating book.