Despite the smoked salmon of the title sounding rather
glamorous, this is actually an impressively cheap dinner to make and relies mostly on storecupboard essentials. Also, because the smoked salmon is hidden, you can get away with using an oddments pack instead of splashing out on pristine slices. I first saw a version of this recipe in a Prue Leith cookbook and have adapted it for the simplicity of caravan cookery. Pate a pate pastry is too much faff! 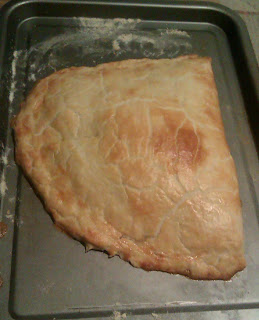 together until the flour resembles breadcrumbs.

Slowly add the water, mixing with a palette knife to form a soft dough. Wrap the dough in clingfilm and refrigerate it for 15-20 minutes.

While the dough is refrigerating, dice the garlic and mix it into the creme fraiche. You can use sour cream in lieu of creme fraiche if you prefer a tangier taste. Then line up everything else along the countertop in the order you will need it.

Preheat the oven to about 200c.
Grease or flour a baking tray.

Retrieve your pastry from the fridge. Dust a worktop and a rolling pin with flour, then roll the dough out to a large oval about 2-3mm thick. Gently mark or crease the dough at the half-way mark, then lift it onto the baking tray. You will be layering your filling ingredients onto one half, then folding the other over the top so bear this in mind as you position your pastry.

Sprinkle the breadcrumbs and grated cheese into an even layer leaving about 1/2 cm around the edge other than the fold line.

Spoon the garlicky creme fraiche over the cheesy breadcrumbs, smoothing it into a even layer.

Arrange the smoked salmon into an even layer over the creme fraiche.

Sprinkle the dill and black pepper over the smoked salmon. Parsley can be substituted for dill if you prefer. Both the salmon and the cheese are quite salty so you shouldn't need to add any extra salt.

Squeeze fresh lemon juice over the dill and pepper.

Brush the 1/2 cm border with beaten egg, then fold the other pastry half over and press it down. Brush the pie top with more beaten egg to make a nice glaze, then pierce the pie a couple of times with a knife to create steam holes. If you don't have an egg, you can brush with milk instead.

Bake the pie at about 200c for 20-25 minutes until the top is golden and the filling is bubbling. Serve immediately.