Benediction by Kent Haruf
My rating: 5 of 5 stars

Benediction is the third volume in Kent Haruf's trilogy set in the rural American community of Holt. I loved reading the first two books, Plainsong and Eventide, so had high hopes for Benediction - hopes which were not disappointed.

Benediction is set some years later so characters that had previously taken centre stage have moved on or passed on. Instead we spend our time with an older man, hardware store owner Dad Lewis, who is dying from cancer, his family, neighbours and staff. I think that this was definitely the most melancholy of the trilogy and not just because of its cancer storyline, but also due to a very real sense of Holt changing as a town. References to America being at war again and the Reverend's disastrous 'turn the other cheek' sermon were particularly poignant and timely given the ISIS Paris attacks last week and many hate-filled reactions I have seen to it.

Haruf was one of the best observational writers I have read. His creation of ordinary people is superb and I love the way he makes the minutiae of their daily lives interesting and important. At one point, Reverend Lyle says that he just wanted to see 'the precious ordinary' and that quote completely sums up Benediction for me. 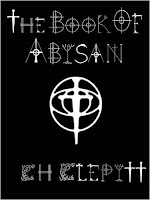 The Book of Abisan by C.H. Clepitt
My rating: 3 of 5 stars

Buy the ebook from Amazon.co.uk

I downloaded my copy of The Book Of Abisan after having been pointed towards it on Twitter. A feminist fantasy novel of witches, magic and multiple realities, it isn't my preferred genre, but overall I enjoyed the read.

The Book Of Abisan is a volume of prophecy, carried and studied by a witch, Yfrey, who is trying to rid her world of an oppressive dictator, Calim. Calim is a charismatic man, but one without any magic of his own and he is determined to rid that same world of all its magical beings, leaving himself all powerful. Clepitt's book is a fast action-packed ride - a complete contrast to my previous read! There is some attempt at rounding out the two main characters, Yfrey and a human woman named Jacques, but otherwise everyone is pretty two-dimensional with the novel's emphasis put on doing rather than being. I thought several scenes were too rushed and would have liked a lot more in the way of description to help me understand what was going on and why, especially once the reality hopping starts. I wanted to know more about the different realities! If that was done I would say that there could be enough plot here for two exciting novels. However, overall this is an easy escapist read and I liked the drawings at the start of each Part.

Beowulf: The New Translation by Gerald J Davis
My rating: 4 of 5 stars

Buy the ebook from Amazon.co.uk
Buy the paperback from The Book Depository

I downloaded Gerald Davis' translation of Beowulf after having read his other translation of Gilgamesh which I enjoyed reading, and the historical Northumberland novel Edwin by Edoardo Albert, who mentioned Beowulf and the Anglo Saxon Chronicles amongst his inspirations. I have vague memories of Beowulf-themed Primary School music and movement classes on the radio: 'and then Beowulf and his men went into the dark forest. Can everyone make themselves into a wild tree for the duration of this interminably long piece of music?' I loathed music and movement classes!

Other than the fab Baba Brinkman rap, I didn't think I really knew the Beowulf story, but reading it here, the events did all seem familiar so I must have absorbed it through cultural references over the years. Or maybe the story arc, like that of the Odyssey and Iliad, has been reused so many times since that the original no longer seems, erm, original. I greatly appreciate being able to read these ancient stories and love that they survive and are still studied and republished so widely. This translation does end with a very scholarly essay attempting to prove links to other contemporary works and real people. I tried to read it, but had to give up!