bag of green lentils I bought in Morrison's last month. I liked the idea but knew I would never get away with serving up their version to Dave - one of the ingredients suggested was swede which I love and he absolutely loathes! So I have kept the basic idea and substituted veggies that we both like as well as making some less healthy additions such as plenty of cheese in the mashed potato topping. The Lentil Shepherd's Pie did take quite a while to prepare, but is incredibly cheap so I am putting it forward as my Credit Crunch Munch entry for August. This month's host is Charlene at Food Glorious Food.

Credit Crunch Munch was the brainchild of Helen at Fuss Free Flavours and Camilla at Fab Food 4 All, and I am enjoying finding a frugal recipe to suggest as well as trying out some of the others. We cooked up Camilla's pork and mushrooms in tarragon sauce in July. I might have overcooked the meat as it was too chewy for us, but the sauce was delicious and I made the same meal again with smoked tofu in lieu of pork and it was perfect.

I am also linking up with this week's Meatfree Mondays at Tinned Tomatoes - an inspiring weekly roundup of veggie recipe suggestions for the next seven days.

Back to the Shepherd's Pie! The recipe below is for two (very) generous 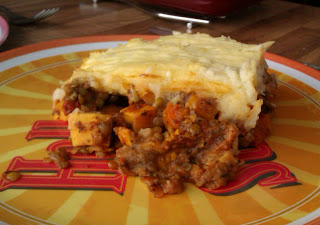 portions and I didn't serve anything else with it. You could easily feed four with a green veg side or a dessert afterwards. I put the new potatoes in because they would have gone to waste otherwise and they did soak up the herby tomatoey flavour nicely. They weren't 'needed' though and I think you could substitute lots of different root veggies for the carrot and sweet potato - this is a real 'use up the veg box' recipe! 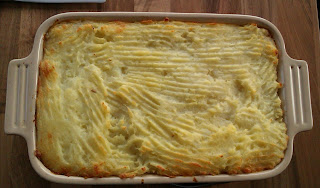 the first list of ingredients (i.e. not the baking potatoes bit). Fry the onion and garlic until softened, then add the diced veggies and stir to coat them with oily onion. I cut my veggies into roughly 1cm cubes.

Leave cooking for a few minutes, then add the lentils, stock and tomatoes. I rinsed out the tomato tin with about 50ml of red wine and added this too. Stir in the dried herbs and seasonings, then bring to the boil, lower the heat, and leave to simmer for up to half an hour. By this time, the veggies should be soft, the lentils cooked, and the liquid reduced.

Put the tomatoey veggies into an ovenproof dish and set aside.

Peel the baking potatoes and cut them into quarters or eighths depending on how big they are. Bring a pan of water to the boil, add a little salt and boil the potatoes for about 15 minutes until they are soft enough to mash. You can set them boiling while the veggies are cooking - I did mine afterwards because there's not enough room in this caravan for cooking and chopping! Plus using the same saucepan saved on washing up later!

Drain the potatoes and return them to the pan. Add the milk and butter 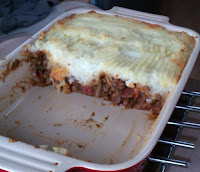 and mash until there are no lumpy bits remaining. Then stir in the grated cheese. I used half strong cheddar and half a delicious local Lancashire cheese that was on special offer and needs eating up. It was a bit too crumbly to grate, but has a perfect flavour for the topping.

Daub the potato on top of the veggies and gently press into a flat layer - like the top pastry of a pie.

You can get to this stage way ahead of time and set the pie aside to bake later, or carry straight on to baking if it's already nearly dinner time.

Preheat the oven to 180c-200c. Bake the pie in the centre of the oven for about 30 minutes until the potato is golden and the filling is bubbling. Serve immediately.

The verdict: I really enjoyed this meal and would happily cook it again anytime. It was light enough for a summer meal and could be tweaked into a winter warmer. Dave, however, wasn't impressed. He did eat the pie and complimented the cheesy potato topping, but also said that he would far prefer a mince and onion filling. Oh well!