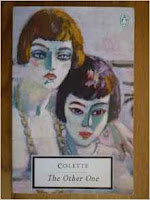 The Other One by Colette
My rating: 4 of 5 stars

One of my WorldReads from France

Buy the book from Abebooks
Buy the paperback from Amazon.co.uk

I registered a book at BookCrossing.com!

Despite being set several decades and a few thousand miles apart, I saw similarities between Kate Chopin's The Awakening and this read, Colette's The Other One. Colette's heroine, Fanny Farou, is trapped within the same societal structure of well-to-do wives being expected to have no other function than that of an accessory to their husbands. In this novella, Fanny's husband, known solely as Farou, is a playwright whose fashionable fame keeps him away from his family for weeks at a time, periods Fanny bemoans as 'we are so dull without him'.

Most shocking, for me, is Fanny's complete acceptance that Farou will be unfaithful to her while he is away. She reassures herself that her position as favourite is secure and as long as Farou's liaisons remain casual and distant, she can live with them. Conflicting emotions arise however when Fanny realises that Farou is also sleeping with his secretary, Jane, a woman who considers herself Fanny's friend although, interestingly, Fanny does not think of Jane in the same light.

Colette cleverly illustrates the relationship between the two women through brief conversations and observations of their behaviour. Jane, assuaging guilt perhaps, is always busy, running errands for Fanny and Farou and attempting to establish an indispensable position in the household. Fanny on the other hand is lethargic and lazy, reminding me a little of Caroline in Andrea Levy's The Long Song. I was intrigued by her indecision, whether she would choose her husband and her companion and how the drama would unfold. The Other One is a small book, both in actual size and in its mostly domestic setting, but powerful emotions are examined and understood through the triangles that Colette establishes.

The Fire Engine That Disappeared by Maj Sjöwall and Per Wahloo
My rating: 4 of 5 stars

The Fire Engine That Disappeared is the fifth of the ten 'Martin Beck' mysteries by Swedish authors Sjowall and Wahloo. I expect that I shall read all ten in time as, at half way through, their style is still sharp with an excellent plot line and there's no sign yet of resorting to dull formula.

Martin Beck himself is a fairly minor character in The Fire Engine That Disappeared. Instead, the lead is taken by Gunvald Larsson, an unlikeable man who manages to be a fascinating character to read about.

The unfolding of the mystery of a fatal housefire in Stockholm takes months to be completed which is far more believable than the rushed timelines of many current thriller novels. Technology is practically non-existent - landline telephones being about as good as it gets - and practically everyone smokes and drinks a lot. Sjowall and Wahloo manage to discreetly weave in some pretty savage comments on the social situation in Sweden in the late 1960s. It would seem they weren't impressed and detail like this adds considerably to the realism of their novel.

I didn't manage to work out whodunnit before the denouement but the unravelling is cleverly presented and has a string of satisfying 'aha' moments. Roll on number six: Murder at the Savoy

Seriously Mum, What's an Alpaca? by Alan Parks
My rating: 2 of 5 stars

Buy the book from Abebooks
Buy the ebook from Amazon.co.uk

I received a free copy of this book in return for reviewing it.

I first came across author Alan Parks on Twitter as he is from the Eastbourne area where I used to live. Spotting his tweet offering a copy of his first book Seriously Mum, What's An Alpaca? in return for a review, I volunteered. Dave and I are currently touring Spain for the winter so reading about an English couple who have taken the plunge to actually live out here seemed appropriate.
Seriously Mum recounts various incidents during the first months of Alan and Lorna Parks' new life as they set themselves up as alpaca breeders in a disused olive mill in Andalucia. Their proposed lifestyle is meant to be idyllic, but unfortunately a lack of preparation and animal husbandry experience leads to a series of disasters that threaten their dream almost before it has become established.

We don't really get to know Lorna through this book as it is written solely by Alan as a series of sketches rather than an in-depth view of their life. The decision to uproot and change career comes across as being a whim that gained a momentum of its own. Neither has experience of livestock care and at several points this ignorance has sad consequences, not enough to prevent more animals being added to their menagerie though. The couple admit to still being completely inept in Spanish over a year after arriving and I found it odd that, despite their insistence on living in a Spanish community rather than with ex-pats, they shun social opportunities such as the Feria week. Many of Alan's written asides criticise Spanish culture from a strongly English perspective and I wonder whether they will ever assimilate or always remain the English outsiders.

With regards to the book itself, Alan does successfully avoid the indie author curse of poor spelling/grammar etc, but Seriously Mum feels very superficial throughout. I would have preferred deeper writing allowing me to get to know Alan and Lorna and understand their choices and decisions. Instead, brief sentences describe serious events such as the day a particular animal dies and is buried which is solely covered as 'a sad day'. I learned next to nothing about alpaca care and even the rich Andalucian culture is mostly bypassed. There are several odd little vignettes apparently written by selected animals expressing gratitude at having been taken in. I didn't get those at all. Perhaps originally intended for young readers? Overall, I found this book disappointing and thought it a missed opportunity.

Search Lit Flits for more:
Books by Alan Parks / Biography and memoir / Books from England
Posted by Stephanie Jane at 11:32