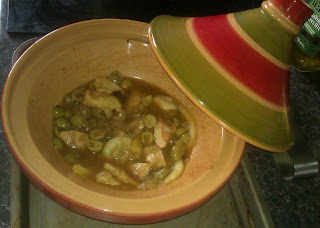 A chance to show off the gorgeous tagine my Dave got me for Christmas a couple of years ago. This turkey recipe is a variation on the very first meal I cooked in it and has become a regular addition to my repertoire. Once the prep work is done, it's basically a leave-it-to-cook recipe - which is what I'm best at.

Preheat oven to about 150C. Ours is a fan oven. You might need to set the temperature a little higher if yours is not.
Add the saffron to the stock and leave to infuse.
Cut the turkey into bite-sized pieces and heat the oil in a frying pan. Brown the turkey then put it into the tagine.
Add the sliced onion and garlic to the pan and fry slowly until softened and lightly browned. Stir in the ginger, coriander and cinnamon and heat through for another minute or two. Add the onion mix to the tagine. If the spices seem to stick to the pan, add a little stock and stir it round to loosen them, then pour the spiced stock into the tagine.
Stir the stock into the tagine, making sure the turkey pieces are covered and put the lid on. Cook the tagine in the oven for about an hour.
Stir in the olives, lemon slices and parsley. Return the tagine for another 45 minutes to an hour.
Serve with cous cous.

The olives contain quite a bit of salt so I don't normally add any extra. Chicken works just as well but turkey is cheaper! Sainsbury's sell a 1kg bag of turkey breast fillets which contains several individually wrapped for £8. It's good value as I only use one for the both of us and the rest keep in the freezer. I also use a small pot of basics green olives - about two-thirds is enough for the recipe and the rest pep up salad lunchbox the next day. The lemon slices are Opies and are in a jar that lasts for ages in the fridge.
This recipe tastes even better if it's cooked one day and served reheated the next. If we're going to do this, I stop cooking just before the add olives stage and extend the second half of the cooking time to an hour to ensure the meal is piping hot throughout.
Posted by Stephanie Jane at 22:53