Why I wasn't convinced by the ending of Bent 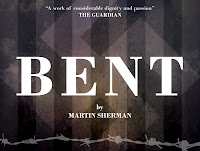 Last week I went to the Little Theatre in Eastbourne to see Bootcamp's production of Bent, Martin Sherman's drama of the persecution of gay men during the Holocaust. It was excellent and I came away quite emotional. The play is certainly thought-provoking, so much so that I have spent several hours thinking over the work I saw - however, the more I think about it, the less I agree with the final moments.

My morning-after reactions are posted in the Comments of this Theatrical Eastbourne post which specifically talks about the Bootcamp Production and doesn't give away the ending.
If you have not yet seen the play and don't want to know how it ends, stop reading this post now!

Early on in the second act, Horst and Max discuss the electric fence which surrounds them. They talk about some men in the camp who commit suicide by throwing themselves onto the fence, positing the argument that orchestrating their own deaths is the only freedom remaining to them. Horst is not ashamed of his sexuality and has made no attempt to hide it as Max has done. The two become lovers, Max falling in love with Horst as I don't think he has allowed himself to do with previous partners. Horst tries to show Max how to be proud and accepting of what he is.
Then comes the disaster of the sick Horst being singled out by a Nazi guard. Given the choice - which is really no choice at all - of the electric fence or being shot, Horst makes a brief, futile dash away from suicide, 'forcing' a guard to kill him. In the Bootcamp production, Ben Woodward as Horst played this scene with a stunning blend of desperation and immense dignity, creating a truly powerful moment of theatre.
Max reverently carries Horst's body away, talking about love, how he finally understands love and believes he is capable of such deep emotion. He swaps shirts with Horst. Max now wears the pink triangle. Horst has not died in vain because Max is now proud to be identified as a gay man.

And then he makes a run for the fence and kills himself. End of play. WTF!

Max has just made this tremendous breakthrough of self-discovery, but immediately throws it all away by dying? Admittedly, it is a fabulous dramatic device with a major shock value! However, I'm just not convinced that this is what Max would have done. We had already seen him expend so much effort on wheeling and dealing, getting medicines and better food and even his yellow star. Discussing the play with friends, it has been suggested that Max couldn't bear to live without Horst but I'm not convinced by this argument. Surely he would have chosen to live, discovering uses for his new-found self-belief?

Perhaps I missed an important clue earlier on?
Perhaps not being a gay man myself means there's something I don't 'get'?

Help me out here! If you've seen any production of Bent, please Comment how you felt about Max's ultimate suicide?